When I heard this it made me believe there is a higher power. I am so tired of hearing about these petty people. It isn’t cute, it isn’t funny, it is plain obnoxious. These people have no thought that isn’t for them. They constantly seem to forget about their children in all their bickering, and use them as leverage. They both claim to have their children’s best interests at heart. Then you see them on tv, and tabloids takes pictures of their kids with the nanny. Hopefully the end of the show means the end of these people being in the media. 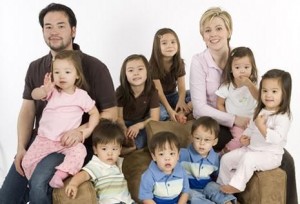 Our long national nightmare is finally over.

Jon & Kate Plus 8, which in recent months had become just about as fun as reliving your parents’ divorce, will stop filming new episodes next month, according to the New York Post.

After Jon Gosselin, 32, forbade TLC from filming his and 34-year-old estranged wife Kate’s eight children for their show, the network will try to squeeze out a couple remaining episodes from existing footage before putting the show to rest, according to sources.

Kate, who’s previously said she relies on the show for her income, and who says the kids have been crying since the film crews left, hasn’t commented. Neither has Jon, who said he put the kibosh on the show because had an epiphany about the harm the show was causing the family – and not because he’d been axed from a future version of the show to be called Kate Plus 8.

It’s not clear whether TLC would restart the show should Jon change his mind about filming the kids.

I like how People acts all outraged, but I’m sure they loved the coverage when the family was huge in the ratings. Also, I have trouble feeling sorry for Kate. They have made millions off of the program. So, yea you rely on it for income, do you know how many people would love to have the money you have currently? I think it would be wise to start looking for jobs.