Jesse James Has Foursome With Tattoo Artist, Model, and Receptionist! 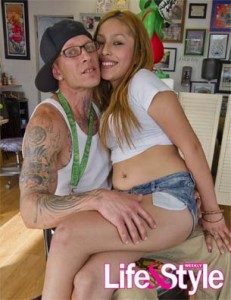 Jesse James, soon to be ex-husband of Academy Award winning actress Sandra Bullock, has been in rehab since all of the news broke about his affairs with various women during their marriage. Read about Jesse James’ ongoing affair with tattoo model Michelle “Bombshell” McGee here.

According to Life & Style, Michelle “Bombshell” wasn’t the only one James was cheating with – at the same time! Their latest story tells of Jesse James’ unprotected sexual encounter with three others, none of which were his wife Sandra Bullock.  Here is an excerpt from the story below –

In an exclusive interview with Life & Style, tattoo artist and owner of Ocean Beach Tattoo and Piercing in San Diego, Eric McDougall, and receptionist, Skittles Valentine, confess to having a freaky foursome with Jesse James and Michelle “Bombshell” McGee last June – and Skittles had intercourse with Jesse without a condom.

The racy encounter took place one drunken night after the Ink-N-Iron tattoo festival last June while Sandra Bullock was busy promoting The Proposal. “Michelle came into my shop and was like, ‘I’d like to introduce you to my boyfriend,'” Eric tells Life & Style. “I recognized Jesse right away.”

After Eric filled in Jesse’s octopus tattoo with a little color free of charge, Jesse and Bombshell went to a liquor store downstairs and returned with booze to lighten the mood. Michelle made the first move, kissing Skittles, and then they all found their way to the tattoo parlor’s private back room. “Jesse and Michelle both wanted Skittles,” says Eric, noting there was never a mention of Sandra.

“Eric and I were having sex, so we switched off, and Jesse and I had sex,” Skittles tells Life & Style exclusively. “I had an awesome time. I think Jesse is so cute.” The foursome ended only when Bombshell got jealous of Skittles spending too much time with Jesse — and the two ended up in a hair-pulling, knock-down fight! (Requests for comments from Jesse and Michelle were not returned.) While Eric can’t recall if he used protection during the more intimate part of the night, Jesse didn’t use any protection. “Maybe I used a latex glove,” says Eric. “I don’t know. Sometimes as a last-case scenario I tie a latex glove finger off.”

For more shocking revelations including ANOTHER stripper revealed, pick up this week’s issue of Life & Style on newsstands now!

What do you think about everything going on with Jesse James and his affairs?  Leave a comment below!