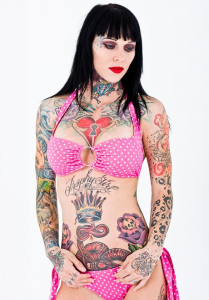 I can’t help but feel pretty sorry for Sandra Bullock right now. She is coming off a high point in her career, and now the man she thanked in her Best Actress speech has been revealed to have cheated on her.

Jesse James, star of Monster Garage, was said to have met Michelle “Bombshell” McGee after McGee sent him a friend request on a social media site. The model was interested in being on James’ show, and the two met up to talk about it. Although, things quickly went from being friendly to inimate. McGee alledges that the two had sex “two or three times” the first night they met, and after kept a serious relationship going.

The kicker of this all? Bullock was away filming the movie that has brought her career so much success over the past few months, The Blind Side.

Currently, the rumor is that Bullock has started moving out of the house that she shared with James, and it looks like this could be the end of what seemed to be a happy couple.

I don’t know if you’ve seen pictures of this Michelle “Bombshell” McGee, she is covered in tattoos, and has fake breasts. She is about the exact opposite of Sandra Bullock it seems.  She also seems to be a bit of a media whore, which really sucks, because Bullock really was riding the wave of success, and this is enough to probably knock her off of it.

No one likes cheaters, but do you think Bullock should take James back? Do you think she should drop his ass to the curb? Let us know in the comments.