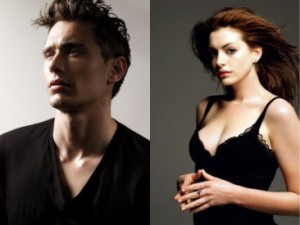 Things are going to look a little differently at the 2011 Academy Awards. Nope, they aren’t going back to one host, but they are cutting the age of the hosts in about half. James Franco of 127 Hours and Anne Hathaway of Love & Other Drugs will be doing the hosting duties for Hollywood’s most prestigious awards ceremony.

The Academyof Motion Picture Arts and Sciences released a statement today that said, “James Franco and Anne Hathaway personify the next generation of Hollywood icons fresh, exciting and multi-talented. We hope to create an Oscar broadcast that will both showcase their incredible talents and entertain the world on February 27. We are completely thrilled that James and Anne will be joining forces with our brilliant creative team to do just that.”

Some consider this a big improvement over the Alec Baldwin and Steve Martin show of last year, but I’m not convinced. Steve Martin and Alec Baldwin are solid comedic entertainers (Martin especially), who have long histories with live television, as they both to the list of most times hosting Saturday Night Live.  As much as I respect Hathaway and Franco, I don’t really see them as the type of people to host a live awards show. Although, I’m hoping to be pleasantly surprised.  Most likely this will draw in the younger viewers as well.

I look forward to the awards this year, and the idea of Franco hosting puts a new twist. I’d say there is a very good chance for him to be among the “Best Actor” category, and it would be neat to see a host up for an award.