The video game revolution kicked off in 1972 by Magnavox® with the Odyssey and later garnered its massive public appeal with the release of Atari and the classic game “Pong”.  Disney finally catches up 38 years later with Epic Mickey.  Epic Mickey takes players on a journey through what can be described as a twisted trip through Disneyland and many of the classic Disney cartoons that made the animation division so famous. The Walt Disney Company was founded back in October of 1923. One of their first creations was Steamboat Willie (the cartoon character that eventually became Mickey Mouse) in November 1928.  Which only makes this reviewer wonder; what took Disney so long to create a video game based around its star character? 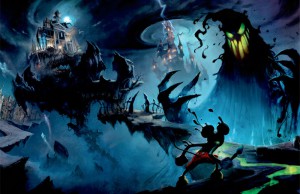 This game makes the most out of highlighting the companies’ animation, theme parks, and Mickey fans.  It showcases the jewel of the Disney Company at its… umm, finest?  Or rather I say worst.   Anyone who is a true gamer is will appreciate the decision of Junction Point Studios to bring on legendary designer Warren Spector to help bring this twisted world into reality.  Throughout the game Warren brings in many classic and forgotten Disney characters to assist and guide you through this “Wasteland”.  Let me take a step back and give you a little back story into the game.

The character Yen Sid (originally from the Fantasia movie) created a world where all the original and now forgotten characters of Disney’s incredible animated history can reside.  Mickey Mouse, seeing all this through his mirror, decides one day to visit the model/world that Yen Sid created to see what it is truly like.  In the process of Mickey’s exploration and Yen Sid’s sudden awakening out of bed; Mickey accidentally spills thinner on the model, damaging the world and in effect creating “Wasteland” as well as the ink blot that becomes the game’s antagonist.  He spends some time trying to quickly repair the damage he has made and then rushes back through the mirror and forgets all about the model.

That is until one day when the ink blot seemingly pulls him back through the mirror to face what he has done.  You spend a lot of the game furtively trying to clean up the mess Mickey has made.  To accomplish this you must of course defeat enemies along the way.  But you have two options; take the easy route and use the thinner which will essentially destroy your enemies or you can choose the more difficult path and repaint them. 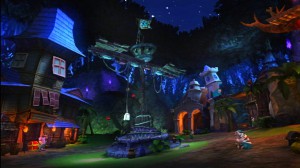 Gamers are rewarded on both decisions and this makes the game good for repeat play especially if you love the old classic cartoons of Disney, many which are seen as segues between the levels.  I can’t give this game a perfect score though.  There are lots of issues with the camera tool being a bit of a nuisance as you explore some areas that you almost think are not meant for you to explore.  On a nice post note, the game is a perfect update to the N64 platform, while bringing theme park fans and platform gamers together.

If you are going to purchase this game for your collection, remember the nostalgia and rich history of Disney that can be shared with others.

I give the game 4 out of 5 stars since the lack of camera control can be a problem.