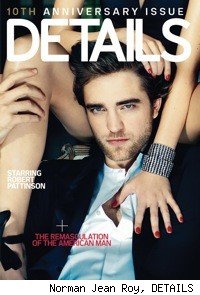 Robert Pattinson recently gave an interview to Details magazine, and apparently he was smoking whatever John Mayer was. He isn’t belligerent or racist at all, he just makes some comments that don’t really fit with his marketed image. The biggest one of them all being one when talking about the photo shoot with naked women for the magazine shoot:

“I really hate vaginas. I’m allergic to vaginas. But I can’t say I had no idea, because it was a 12-hour shoot, so you kind of get the picture that these women are going to stay naked after, like, five or six hours…Thank God I was hungover.”

Rob, did you know that every time you say actor or acting you lower your voice to a whisper?
He’s genuinely startled. “I do?”
Yes, so quietly it’s like you’re saying Negro.
He laughs, lightens up. “What if we were ‘acting‘ like ‘Negroes‘? Then we’d be fucked—we couldn’t hear anything. . . .”

You can read the full interview here, and see the NSFW photoshoot.

These are taking a bit out of context, but they are funny, so we’ll let it slide. Really, Pattinson comes off pretty well in the interview. I’m still not sure if he isn’t a one note actor.