Interview: Jason Hall, Writer/Director of “Thank You For Your Service,” Starring Miles Teller 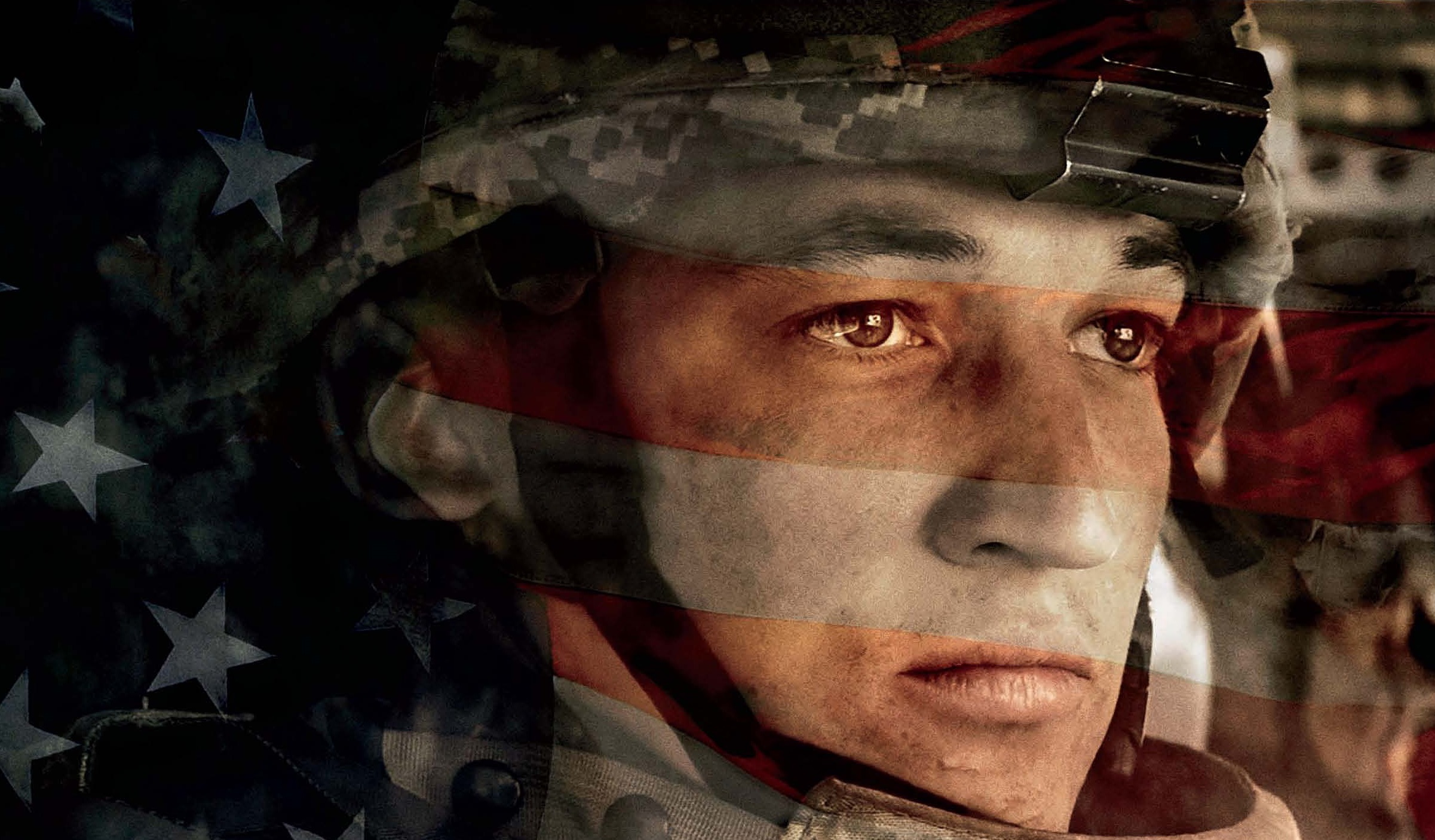 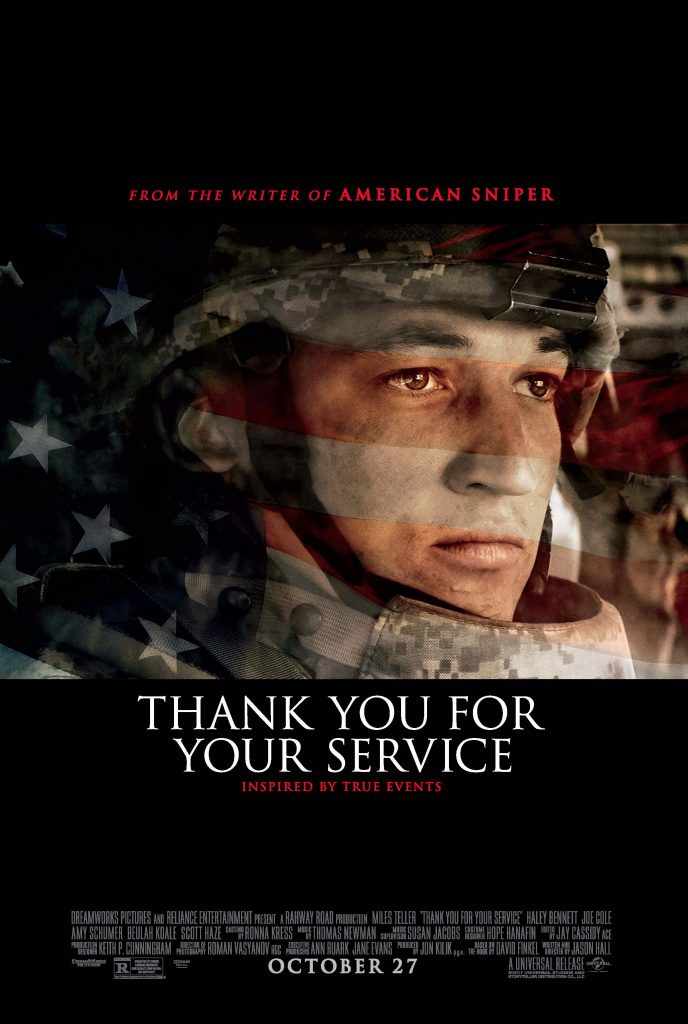 When a war ends for soldiers coming home, there is often times a new war beginning. It is the invisible wound that gets the least amount of attention, yet needs it just as much as the physical trauma. Young men and women are coming home appearing whole, but are anything but. And it is this type of injury which is the basis for the new film, Thank You For Your Service, starring Miles Teller as real-life Sergeant Adam Schumann.

Inspired by true events, the film follows Schumann and two of his fellow soldiers as they struggle to integrate back into society after returning from Iraq. Schumann, along with Tausolo Aieti (played brilliantly by newcomer Beulah Koale) and Will Waller (Joe Cole), struggled with PTSD among other mental disorders – causing difficulty with relationships, work, and everyday life.

The difficulties the soldiers faced were chronicled in the book of the same name, and the basis for the new film, written by journalist David Finkel. Finkel previously traveled overseas to document the lives and events of the infantry soldiers of the 2-16. When they returned home, they allowed Finkel to follow them again and document some of the most intimate and painful moments they experienced.

“On out of four, or one out of five – depending on who you ask – comes home, and they have some form of PTSD or TBI (Traumatic brain injury),” says director Jason Hall. 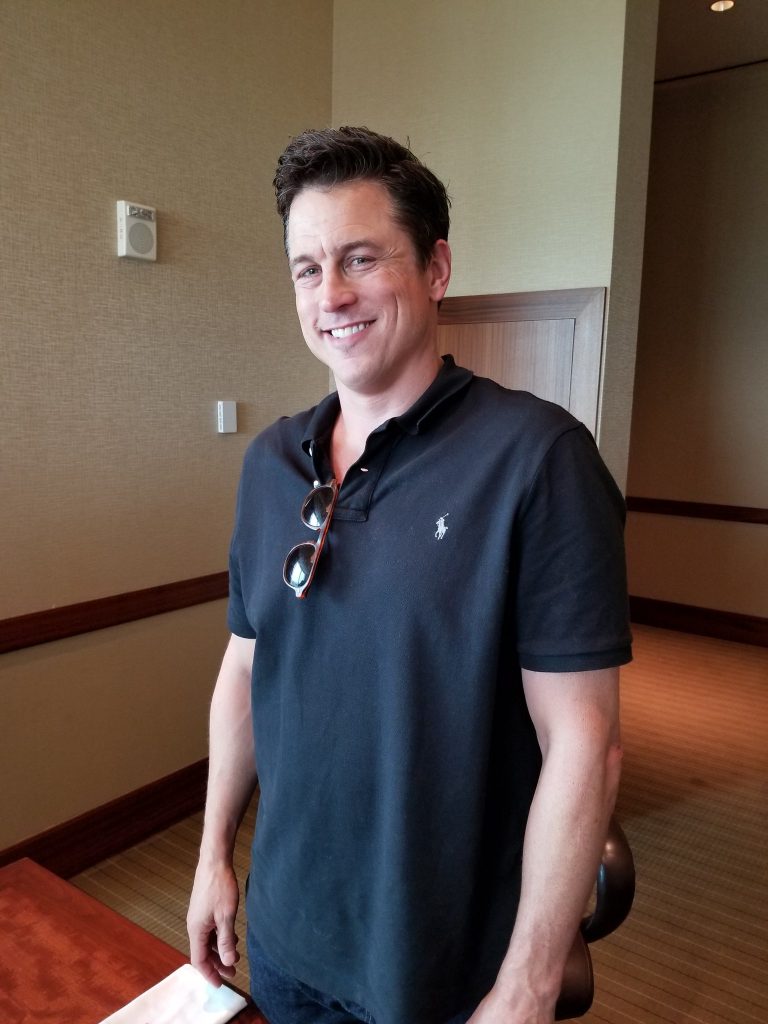 The filmmaker made a trip to St. Louis to show his latest project, and talk with the audience afterwards during a Q&A. We were lucky enough to sit down with him the next day and further discuss the upcoming film, which is also his directorial debut.

Hall, who worked with Clint Eastwood as the screenwriter of American Sniper, was selected by Steven Spielberg to take over directing duties after years of interest in the project. On bringing his past experiences while working with the real life heroes portrayed in this film, the director said,

“I think it helped them trust me. But I thought I was going to walk right in here, and I know who these guys are; I know the language. But that isn’t true. These guys fought a different war than Chris Kyle fought. They come from different places, different backgrounds, and most starkly they had different training.”

Coming from different backgrounds than those of the Seals depicted in American Sniper, the soldiers in TYFYS often reacted differently to combat.

“You’re taking a lot of guys who, we were entering the surge, and we needed everybody we could get our hands on. So you’re taking guys who already have some challenges in their life, and you’re putting them into a HUMV, and they’re driving around waiting to get blown up. When you start adding trauma and brain injury to those challenges, you’re looking at some serious consequences.” 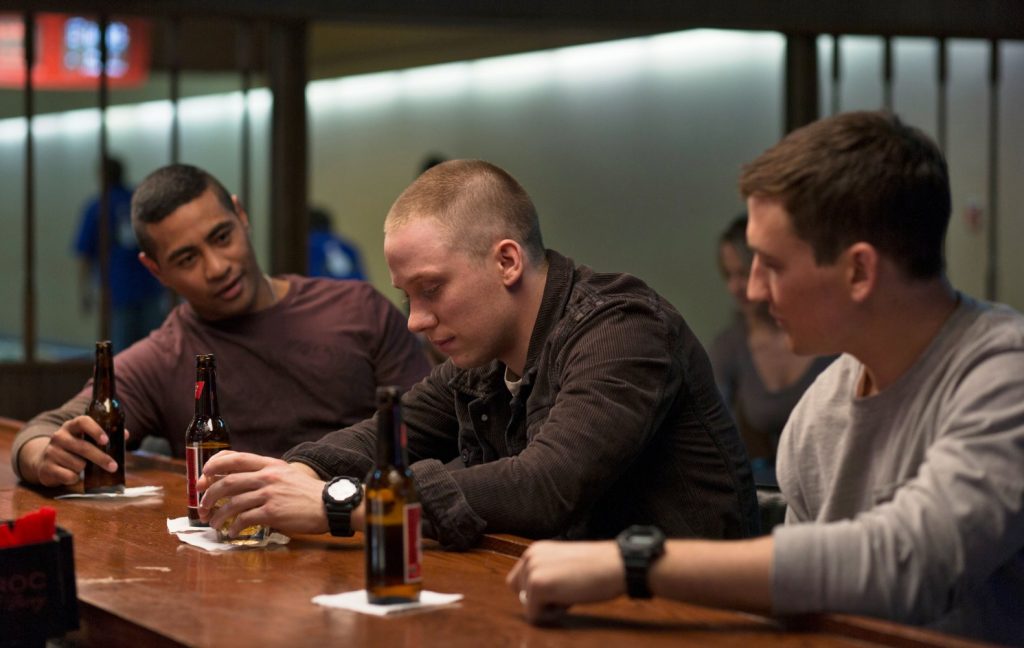 When asked if he has noticed any resistance from veterans who might not want to re-live some of their recognizable trauma, Hall said,

“The only resistance we’ve had is from combat veterans who immediately think, ‘well why would I want to see that? I lived that, I don’t need to experience it.’ But what we’ve found is that when we do get them to come see it they’re like, ‘Oh wow, this is my story. Someone finally told my story.’ That’s what we’ve gotten over and over again… from screening, after screening, after screening. You hear the same thing from these guys, and it’s great. But, yeah, we face a hurdle of getting these veterans to believe that this isn’t just some Hollywood-ized version of their story.”

Hall and his crew made sure that his story was respectful of the soldiers shown, and veterans everywhere with similar stories.

“We went to extreme measures to make this the most realistic, authentic depiction of what these guys have been through for reason. And that reason is so that we can, as a society, sort of start to understand what they went through so that we can have a conversation with them and begin to open the door. And to find a new way to welcome them home.”

The film is not only opening up the conversation to civilians, but even family members and friends of veterans who have no idea exactly what they have been through.

“We’ve had guys come, and they bring their wives. The wife has been living with him, and he’s been home for five years. He’s got a good job; He’s got his stuff squared away.  And the wife says, ‘wow, I had no idea. Do you have any stores like that you haven’t told me?’ And the guy’s like, ‘Yeah.’ And they almost all have those stories that they haven’t shared. And they haven’t shared because they didn’t think we were ready. And because they don’t want to burden us with what they are carrying.” 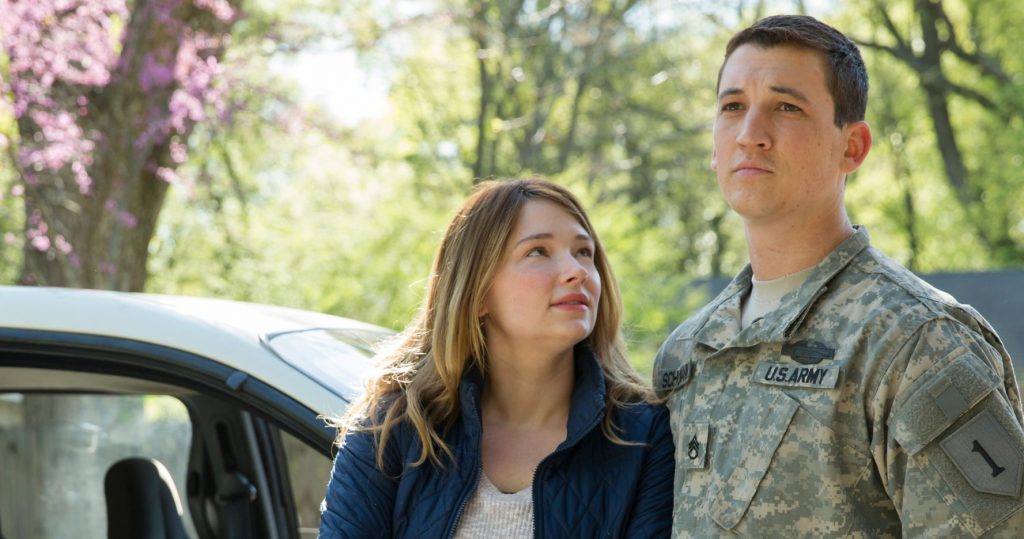 But Hall believes that these veterans shouldn’t have to carry this burden alone, and there is plenty that we can do. The first step is promoting awareness, and starting the conversation. Something that the film does very well.

“I think it’s our responsibility,” says Hall. “People keep asking me about VA, and what can they do because, ‘The VA is terrible.’ And I’m like, ‘The VA is trying to fix the VA. But what can we do?’ We can’t just point a finger at the VA. It’s up to us as a society to find a way to welcome these guys home.”

And according to the director, raising awareness of what these soldiers are going through has already proven successful in other countries.

“In societies where they have a better understanding of their warrior class, and what they’ve been through, they have a better way of welcoming them home. And they have less instances of PTSD and other stigma related injuries. In Israel, where everybody serves, there’s less cases of PTS. Because they welcome this guy that fought, and are like, ‘I know what you’ve been through. Come and sit with us; eat from our food and lets talk.’  That kind of therapy and that kind of exchange doesn’t happen here.”

Although the soldiers who are the basis for the film don’t play themselves, several are featured in cameo roles.

“Adam is in the film, he welcomes Miles [Teller] home, takes his rifle and says, ‘Welcome home Sgt. Schumann.’ So he’s in essence welcoming himself home. Emory is in the film, in the VA you come across his face. Tausolo was too shy to be in the movie, but he didn’t really want to be involved at all until I got the Samoan actor to come on board. He was able to call him, and speak to him in his own language. And I think that meant the world to Tausolo, that this guy called him and started speaking in Samoan.” 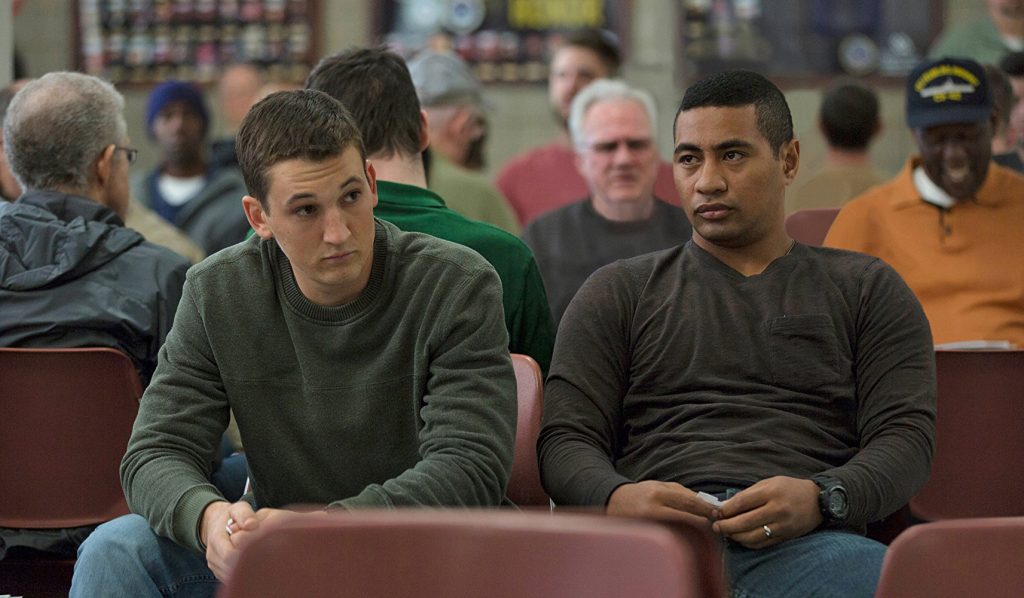 On working with Miles Teller, who until recently has been featured in mostly comedies, Hall said,

“You know, my favorite performance of Miles’ is Rabbit Hole, the first movie he did. He brings such a sense of truth, and authenticity, to everything. Even when he’s being a wise acre in some of these comedies. There’s an ease to him that I find really compelling. I also find that he’s a character actor in the leading man’s body, and face.  He’s got the ability to disappear into these roles, which is important.”

Spielberg, whose DreamWorks Pictures produced Thank You For Your Service, cites The Best Years of Our Lives (1946) as a large influence for him.

“I think The Best Years of Our Lives is great in terms of social realism,” says Hall. “You feel like a camera was put into that room, and it’s all happening. And that’s what we wanted here; We wanted this to be as realistic as possible, and so we filled the VA with real veterans.  And we shot in Tausolo’s house, and we decorated it exactly like any picture we could find. And any war scene, in many cases, the graffiti you see on the wall was actual graffiti that was documented by Magnum photographer Peter van Agtmael… We recreated truth, because there’s an element of that which just resonates differently. Social realism as an idea may confuse people, but it’s just telling the truth – and cutting it as close to the bone as you can. The only way we could have gone further was to cast real veterans in these parts. And it wasn’t for lack of trying.”

Thank You For Your Service opens in theaters everywhere this Friday, October 27.