Interview: Faux Bono Is Almost “Even Better Than the Real Thing”

Elevation, which features Danno as faux-Bono (bottom), will give St. Louis a "Beautiful Day" Tuesday, Aug. 9, at The Dubliner.

As an iconic band that’s been together for 35 years, U2 is looked up to by many musicians, but they’re not often imitated well. One of the rare bands that rises to the challenge is Elevation, and they go well beyond basic sound-alike karaoke. Elevation, which bills itself as the best U2 tribute band on the planet and is based primarily in St. Louis and Chicago, fully immerses itself in the chord progression, percussion rhythms, vocal stylings and stage presence of The Edge, Adam Clayton, Larry Mullen Jr. and Bono, themselves. Armed with costume changes and U2’s career-spanning songs, Elevation takes fans on a journey through rock history. When you see and hear Elevation, you will believe you’re experiencing the real U2.

We caught up with Elevation’s faux-Bono vocalist Daniel Burrow (dubbed “Danno”) as he prepares for his band’s show at The Dubliner, scheduled for 9 p.m. Tuesday, Aug. 9, at 1025 Washington Ave., in St. Louis. RSVP on Facebook for the free show, and learn about Elevation on the band’s website.

How many times did people call you “Bono” before you finally threw up your hands and put together a U2 tribute band?

Not until I started doing karaoke here in St. Louis.

What can people expect from Elevation’s show at The Dubliner?

The greatest U2 tribute on the planet! We do a little bit of every era of the band and of course all the hits. Live and out of control! 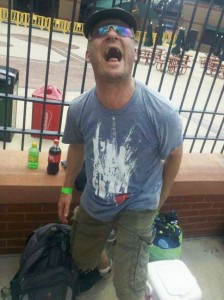 Danno belts out a U2 tune while in line for the real band at Busch Stadium in July.

How did you acquire Bono’s mannerisms in voice and actions so precisely?

It just happened! I’ve been a fan since the 80s and channeling him ever since.

What’s the strangest gig Elevation has ever played?

That would have to be the Mancow morning radio show stunt we pulled in Chicago, playing on a flatbed truck in front of the White Sox stadium (U.S. Cellular Field). People really thought it was U2! WGN TV’s morning news sent their helicopter to cover it and then realized after they had announced that U2 was doing a surprise concert that it was a hoax put on by Mancow.

What would Elevation members do if they were stuck inside of a giant lemon right before a performance?

Probably just bust out of it!

You sing lead and play guitar for Elevation, but you actually are a drummer, right? What’s up with that?

I’ve played and taught professionally for over 35 yrs; that’s what I went to school to do. I still play in St. Louis, subbing in local bands when I can. Stix for hire!

If U2 finally said, “Alright, lads, all U2 tribute bands are off to the slammer” and you had to cease being Danno, what band or performer would you most like to cover next and why?

I would love to play drums in a Police tribute band! I’d wear the knee-high socks and short shorts a la Stewart Copeland. Or maybe I’d do Phil Collins/Genesis, and then I could still drum a little.

What did you think of the recent U2 show at Busch Stadium?

A magical night, the best show I’ve seen them do. They were ON!

What are your favorite and least favorite U2 songs to cover?

Faves: “Where the Streets Have No Name,” “I Will Follow,” “Beautiful Day,” “Elevation.” (duh) Least favorite: “Bullet the Blue Sky” and “Angel of Harlem.” There aren’t many I don’t like doing, really.

How many U2 shows have you been to?

Seventeen in my life.

Which song pushes you to see the real U2 in concert again and again?

The whole catalogue, but for sure “Streets.”

Why cover another band? Why not form the Daniel Burrow band?

I’d love to. Maybe someday I will, if I can find the time!