Another Take By Zac: Film Review: The Help 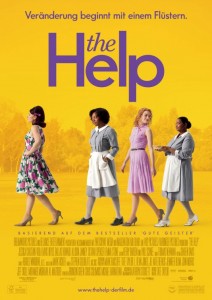 The Help is built around a lot of strong performances, but the film doesn’t bring anything new to the table, and does only a couple things really well beyond the acting.

An adaptation of the best selling novel, most of you probably know the story.  The film looks at life in Jackson, Mississippi in the early 60’s, in particular the relationship between the white housewives and the black hired help.  Skeeter is an aspiring journalist/writer who needs to gain some experience before an interested publisher will give her a job and she gets her first break ghost writing a cleaning column.  As a just out of college, privileged, white girl, Skeeter enlists the help of her friends ‘Help’ to give her cleaning tips.  Skeeter has a positive relationship with ‘the Help’ around town and doesn’t hold the same societal prejudices of the town.  When Skeeter’s ‘friend’, Hilly, begins to become quite the enemy of ‘the Help’, Skeeter attempts to recruit the local maids to tell their side of the story in a book.

The film’s narrative is stretched over a number of plots and characters and I would argue that there are too many for the film’s runtime.  For example, I revolved my above summary paragraph around the character Skeeter, which would lead you to believe she is the lead character, but one could argue she is the fourth or fifth lead in the film.  Skeeter’s story is mainly a facilitating plot for other characters and her personal elements of the film don’t carry much wait actually.  None of her family relationships are built strong enough for us to care and the tragedy with Constantine, her childhood ‘help’, comes across quite contrived and unbelievable.  Emma Stone does a fine job as the character though, and makes her someone you can get behind; even if the film doesn’t give us many valid reasons to.

All this talk about Skeeter and she isn’t really the lead.  So who is?  Well Minny and Aibileen (the main representatives of the ‘help’ in the picture) are the driving forces and standouts of The Help.  Octavia Spencer and Viola Davis play Minny and Aibileen respectively and they both turn in fine performances. Davis turns in the highest highs performance wise and Spencer, along with Jessica Chastain as her employer, turn in my favorite plot line in the film.  All three of the ladies mentioned here do the best work in the picture, with Chastain stealing every scene she is in.

The cast is pretty great from top to bottom actually, even in the under written characters.  Take Hilly, she is a one dimensional evil bitch, but Bryce Dallas Howard shines and kills the unoriginal part.  Allison Janney does her best to save the weakest main character in the film, Skeeter’s Mother, but her flashback is the low point of the film.  But as I said in the opening, the acting is great across the board so there is that.

The film’s message though is nothing new and if it takes you this long to realize blacks were mistreated in our country and it is still overwhelmingly affective on you then I don’t know what to say.  I am not marginalizing what happened in these times, it was a terrible and horrible way of life that sadly isn’t as extinct as most would like to think it is, but seeing this time of our country doesn’t shock me like they are hoping it to.  The stuff that affected me were smaller character moments, the ones that actually worked at least, not the historical beats we all know.  Actually, I think the film does a poor job of integrating history into the story and giving us the black prospective on a lot of the horrible things happening in Jackson at the time; especially when so much of it is told through their eyes.  I also will say that the film felt a bit like whit guilt porn for the first half hour or so, but luckily the film got away from that once it set everything up.  The film’s tone is also a bit all over the place in that it has multiple instances where it seems very confused on what we should be feeling; which would be fine if the film wasn’t so clearly a straight forward affair.  Oh yeah, and half the film, and most of the film’s humor, revolves around a poop joke; and that isn’t a compliment.

In the end, The Help is an adequate film with some great acting that still can’t elevate above its material.  The basis of the story is a great story to get out there, but I feel like this doesn’t do the history it’s trying to tell the full justice it deserves.  The film is by no means bad though, the actors are a joy to watch and the story has enough nice moments to make the film worth watching.  Just don’t expect some greatness or some great adaptation; you can feel the film straining to cram too much in there and the film isn’t better for it.