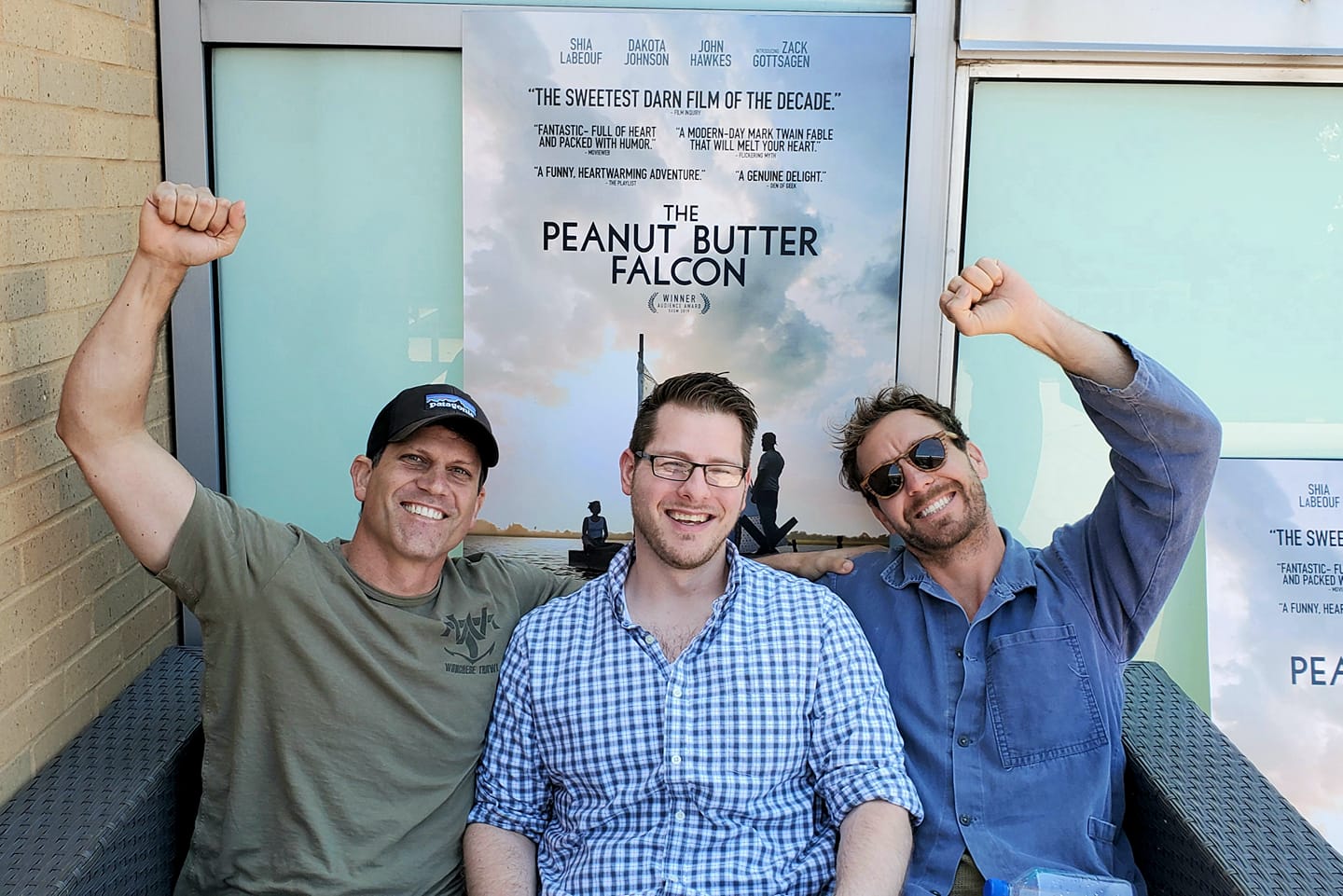 Hitting theaters today in St. Louis is one of the most heartfelt and entertaining films of 2019.

The Peanut Butter Falcon is the story of Zak (Zack Gottsagen) – a man with Down syndrome – who runs away from the nursing home he lives in to train at a pro wrestling school run by his idol, The Saltwater Redneck (Thomas Haden Church).  Along the way, he meets Tyler (Shia LaBeouf) who is running away from plenty of troubles of his own. The two of them form an unlikely friendship, while Zak’s caretaker Eleanor (Dakota Johnson) does everything she can to bring him home safely.

The writer/directors of the film, Michael Schwartz and Tyler Nilson (pictured above with me in the middle), made a stop through St. Louis ahead of the film’s release to talk about their own journey of getting the film made.

“We were neighbors in Santa Monica, and we became buddies,” Michael fondly recollected. “I noticed a wildness in Tyler that I related to. I think sometimes if you’re going to make a movie, being delusional helps. And I think Tyler had the same amount of crazy. We were going to do this, and there was never any doubt.”

Nilson was then surprised when I asked him about something I read online – that he was adventuring in the South Pacific during his younger years.

“You’re the only one who has ever asked me about that! Mike and I are pretty wild dudes. Mike had just ridden his bike across the country, and then danced on a street corner for six months and made a movie about it in the snow. He’s such a unique guy. That was some of the crazy I recognized in him. I had gotten on a plane – I was in Samoa, running boats around reef passes for surfers – and had almost been lost at sea. And to both end up in a small apartment building in Santa Monica from those two places, obviously, there must have been some divine intervention that put us there.”

Both of them agree that when you are a writer, these adventures greatly help shape your work.

“I think you want to go live stories,” says Nilson “I may have come to writing a little late, but I didn’t come to storytelling late. I was already out there creating my own stories, and writing my own story.”

He mentions that whenever you are writing, personal things are sure to come out. There is a memorable moment between Zack and Shia early on in the film that mirrors something Zack said to Nilson in real life after knowing each other for a while.

“Zack says, ‘I’m a Down syndrome person.’ We’ve been friends with Zack for years, and he told me one night after we’d been buddies for three years, ‘Oh, I didn’t know if you know I have Down syndrome or not.’ It’s impossible to be a writer and not have something come from your own personal experience.”

In the film, Shia’s character doesn’t shy away from keeping things real with Zak. There’s a fine line to walk, but the script balances these truthful scenes perfectly. 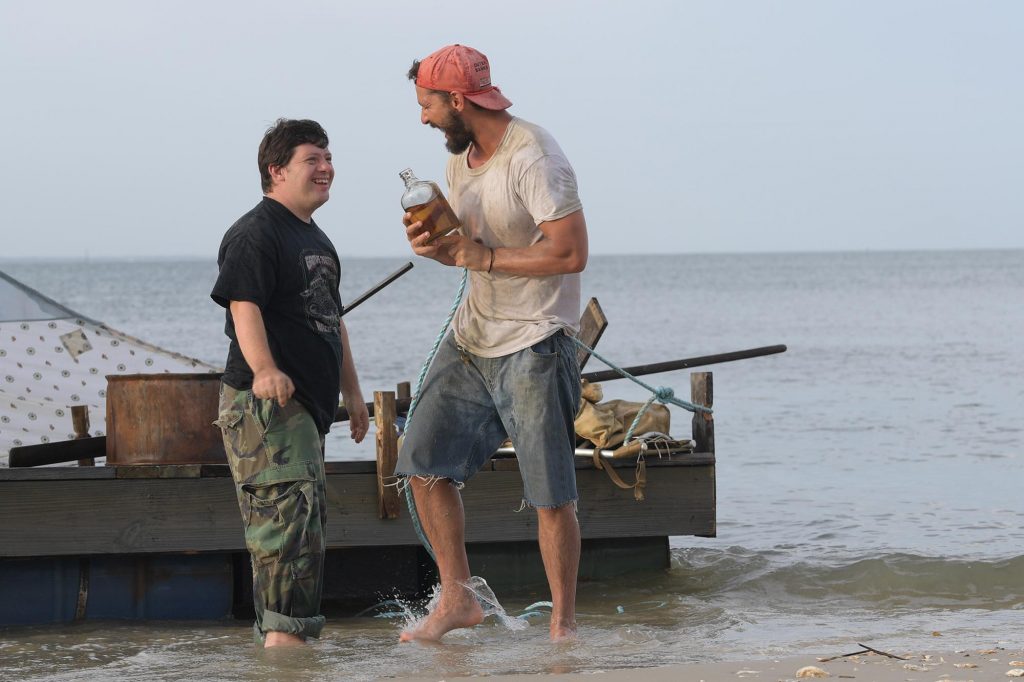 “We’ve got three Oscar nominees in the movie,” says Schwartz. “And they would come to us before scenes, during scenes, after scenes – and say, ‘Zack is so present.’ That’s the most you can ask for from an actor, that somebody stays present in a scene. ‘And it’s hard for us to match him at that level, in pretending,'” the director recalled them saying to him.

“The Tyler character kept it really real with Zak. As friends, when we were in the writing process, it was important for us to keep it real with Zack,” Nilson recalls. “We met him at a camp for people with and without disabilities, and we were doing a short film with him. And saw him giving really heartfelt performances. One night at dinner, he was explaining, ‘I really want to be a movie star. I want to be in movies.’ And keeping it real, just like the character, I said, ‘I don’t think you’re going to be starring in a feature film.’ And keeping it real as he does, he says, ‘Well, what if we did it together?’

The three of them spent the next year developing a script that would work with Zack’s strengths.

“We knew he could be an actor,” says Nilson. “We wanted to create an opportunity for Zack to show his talents as best as possible. His talents aren’t dunking a basketball, but the guy can act the s–t out of something!”

To the point of keeping it real and not sugar-coating something, Schwartz added,

“We’ve talked to people at Special Olympics, and special ed teachers, and you can be overly nice as well – it’s condescending. It’s sort of what we tried to address three-quarters of the way through the movie when Eleanor and Tyler are having the conversation on the raft. And it’s something that is not talked about a lot. There’s the respecting somebody, and their frustration, and their dreams – and the reality of the world is sometimes more beneficial than just saying, ‘You’re a champion! Everybody can be everything!’ There’s some condescension in that sometimes.’

The cast they assembled to take on this challenging material is phenomenal, and even they still can’t believe it sometimes.

“We never dreamed that we were even going to have a high-five ever with anybody like Shia LaBeouf, or Dakota Johnson, or John Hawkes, or Bruce Dern,” says Schwartz. “We wrote the script and planned to make it for $20k or $30k dollars, and figured out how to do it with Kickstarter. It didn’t work out. People wouldn’t help us, and people wouldn’t read the script. So we went and shot a trailer, where Tyler played Tyler and Zack played Zak. And people saw that, and wanted to make that movie. Even Shia LaBeouf – he FaceTime’d us and said, ‘I’ve only read thirty pages of the script, but I want to do this. Will you please let me make this movie with you?'”

With the strength of their script, Nilson and Schwartz didn’t face much resistance due to any of the subject matter. However, it came in the form of more traditional Hollywood meddling – producers wanting them to cast a star in the role of Zak. But the writer/directors stayed true to their vision, and the role they wrote for Zack, and ended up working with producers that understood what they were doing.

“He is the star,” says Schwartz. “We have a crazy cast, but also Zack was number one on the call sheet. He was the most important person there, and he stars in the movie.”