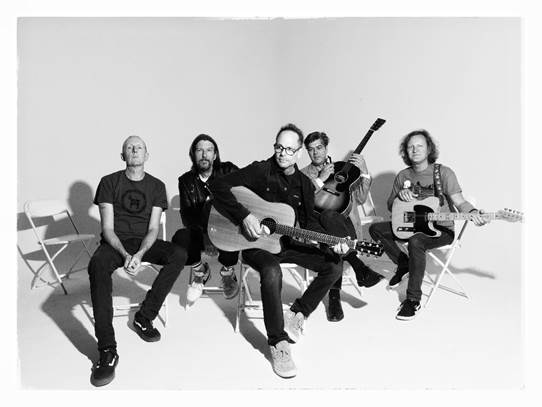 Gin Blossoms first broke through the music scene in 1992 with their hit album New Miserable Experience, which featured the hit singles “Hey Jealousy” and “Found Out About You.” The album sold more than 4 million copies. The band went on to have success with future albums and singles, becoming a staple on the 90’s rock scene. The band has been featured on soundtracks such as Wayne’s World 2 and Empire Records, while releasing a greatest hits album in 1999 and live albums. The band is back with a new album, Mixed Reality, which will take fans back to the sound the made the band a household name in the 90’s, as well as showcase what keeps the band going strong today. I recently had time to speak with Gin Blossoms lead singer Robin Wilson about the new album, the current tour, and the music industry in general.

I wish I could say there will be pyrotechnics and lasers and stuff, but it’s going to be a pretty standard rock concert by a veteran group with pretty decent songs.

We got signed to A and M records and they sent us out to work with this Grammy winning producer. We spent 40 days out in California and spent $100,000 and didn’t failed finish the album. The recordings were not good. We didn’t get along with the producer. We got sent home with our tail between our legs. We thought we were going to get dropped.  To their credit, the label gave us $20,000 to make an EP. We self-produced an EP. It was an attempt for us to grow up a little bit. It was an attempt to show us what it meant to be a major label recording act working at a higher level. We put out the EP and were on tour for about 6 weeks in the coldest part of the winter of 1991. A few months after that tour we went and recorded New Miserable Experience. On NME, those tracks are self-produced from the EP. That’s the story there.

Well, thank you. When you’re making the record you just can’t put everything on it. We had to make some hard choices. Generally, we let the label and the producer decide. Those of us in the band, we’re all competitive with each other. We all want our own songs on the album. More than those numbers, I had a song back in those days called My Biggest Date. I wish that song had been recording on one of our records. I found that song recently on YouTube and was like damn, this is a really good song.

First off, no I don’t remember that show. I don’t really remember too many shows from that time when we reunited. I do have a connection to St. Louis. I have an aunt and some cousins who live in St. Louis. My aunt is one of my favorite people. She just has a great sense of humor, so I am looking forward to having dinner with her. I always enjoy seeing them when I can. Last year we performed at Mizzou before a football game at like 9 a.m. and they came out and watched.

Not all of it’s relevant, only the good stuff is. It’s really as simple as that.

The Gin Blossoms will play Thursday night at Delmar Hall. The show is sold out.