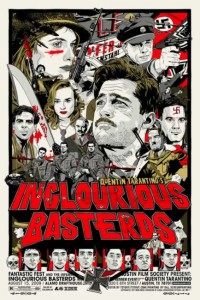 Quentin Tarantino’s latest is the long in development WWII epic that is not really a war film but a dialogue heavy affair like all of Tarantino’s work and the result is slow burn plot that builds amazing tension through fantastic characters all culminating in an explosive final act that could potentially re-write WWII history.

Split into five chapters, ala Kill Bill, there are a trio of characters/groups that are at play here. Fist off is Aldo Raine. Lt. Raine is the leader of the Jewish American platoon of soldiers dropped behind enemy lines in France to do only two things, kill lots of Nazi’s and take each and every one of their scalps. Next we have Hans Landa, or “the Jew Hunter” who is a detective for the Nazi regime seeking out the truth of the regimes occupied countrymen who may be hiding Jewish families from the authorities. One of these families put in question is at risk in the opening chapter of the film and the hate and fear that derives from this encounter produces our third protagonist Shosanna Dryfus. Dryfus owns a movie theater and after catching the attention of a young Nazi soldier, her theater is put into the running to be the host of the world premiere of the perceived German masterpiece, Nation’s Pride. These three paths eventually fall in line and lead them to the premiere where the Nazi high command is in attendance and their intentions lead to ups and downs along the way.

Now, first and foremost, this is not the movie The Weinstein Company is selling; not even close. In fact, it isn’t even remotely the movie Tarantino has been selling us in interviews for all these years. A men on a mission tearing up Nazi’s movie this is not. That doesn’t mean that they “basterds” aren’t doing this over the course of the films timeline, we just don’t get to see put a minuet glimpse of it. Instead we focus on the path of Shosanna and the staging of the “basterds” final steps to infiltrating the film premiere. The first two chapters serve as these characters introductions/motivations, the second two put plans in motion, and the final chapter is where everything comes together. Now, is this a bad thing, no, not in the least bit, it is just not at all what we were expecting, more so if we have been clamoring for this film since before Kill Bill. 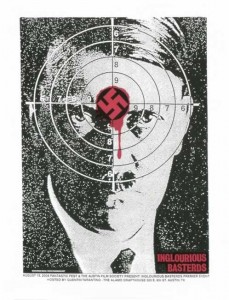 What Tarantino puts on screen is a tension filled time bomb orchestrated with amazing precision. Filled with wonderful and epic dialogue that is pop culture relevant for the time frame of the picture, it’s as if Tarantino wrote this thing right after the end of the war with all the references he plugs in there. The film is also quite funny at times and full of unique, interesting, and fun characters that are a joy to watch. At the top of this list is Hans Landa who is just so wicked and evil, yet intoxicating and charming, we just never know which way to take him. Aldo Raine also delivers the best laughs in the film and almost everything out of his mouth is good for at least a chuckle. Our third lead Shosanna is also just as compelling, but more for her situation and tension on what she might do while being slowly sucked under the Nazi thumb.

The actors in the film are also quite good, with Christoph Waltz’s Hans Landa leading the charge as the most stand out performance. Waltz comes from pretty much nowhere and dominates and steals every scene he is in. His cunning, his swagger, his lack of compassion throw you all over the place and he might turn out to be one of the most likeable evil Nazi’s ever to grace the screen. He is the one you will be talking about after seeing this picture and is actually probably the star of the film, even though Pitt gets top billing. That isn’t to say Pitt is terrible though, in fact he is quite good and a hell of a lot of fun as southern roughneck Aldo Raine. As I said before, he is full of laughs and attitude to spare it’s just that he isn’t in the film a whole lot, especially with the way they are marketing the film. He is absent for two entire chapters of the film and is barely in a third, which isn’t a criticism, just letting you Pitt fans know what you are getting into. The “basterds” themselves are actually quite faceless and are pretty much banished to the background. Eli Roth gets the most screen time, with BJ Novak getting a scene as well, but outside that everyone in the “basterds” is a line here or there. Diane Kruger has probably the fourth meatiest role as German film beauty Bridget von Hammersmark and she takes full advantage of every scene she gets. Using her looks and words to keep her head above water when thrown into a sticky situation with a cellar full of Nazi’s, Krueger shines showing both confidence on the surface while fear bubbles underneath through he eyes. Daniel Brühl and Mélanie Laurent are the focal points of chapter three revolving around Laurent’s (Shosanna) encounter with Brühl’s Fredrick Zoller who is the star of the real life events and of the film in question for the premiere. Lastly, is wonderful as a British soldier who joins the “basterds” and is caught in the mix up at the local tavern. Playing it cool and collected, he carries the scene as the conversation slowly burns the tension higher and higher, it is quite a marvelous scene.

In the end, Inglourious Basterds is a talky and alternate take on WWII history that builds wonderful tension with fascinating characters. While you might be caught off guard by the films dialogue heavy and deliberate nature it is all extremely well done and is almost constantly engaging. The action/violence that does show up is a bit over the top and gratuitous, in fact the premise and outcome of the film is quite silly as well. The ending is borderline absurd, but it is so much fun to experience and aware of itself that it all works. This is not to say the film is silly though, as the intensity of three of the chapters is quite a bit to handle and has you cringing with nerves, just remember that film is kind of winking at you and trying to have fun as well. Tarantino’s latest is an excellent and fun piece of cinema, I just don’t know where it will settle overall in his filmography; I am going to have to see it once or twice more before I decide that. As for you, if you like Tarantino, do not miss it, just don’t expect what you are expecting, the film is anything but that.

Inglourious Basterds is an A- 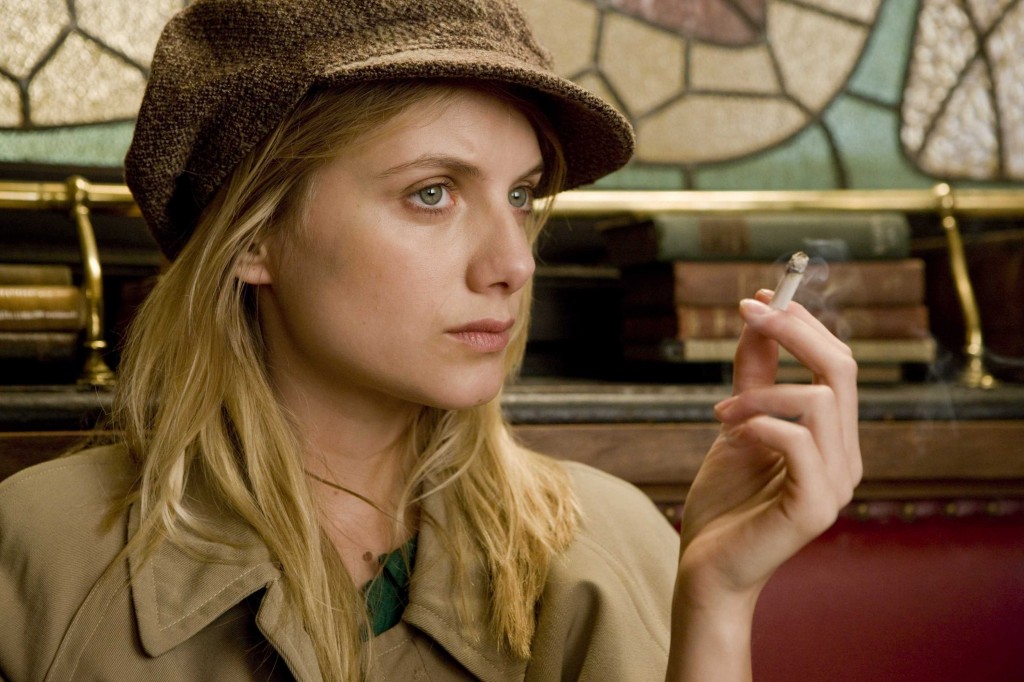