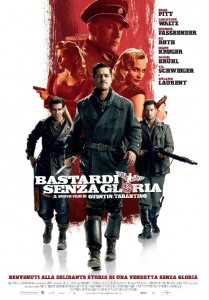 After watching Inglorious Basterds for a second time it is quickly becoming my favorite Tarantino movie of all time. I’m not one of the people who worships at the altar of Quentin Tarantino. I think he makes good films that pay homage to great films (or a lot of times wacky sub-culture films). With Inglorious Basterds it seemed he is really starting to get some more things right. His dialogue, while wordy, was his most elegant to date.  The film was just a fun experience. So, I think there is no doubt I will be adding it to my collection come Decemeber 15th.

UNIVERSAL CITY, Calif., Oct. 20 /PRNewswire/ — Cinematic icon and filmmaker Quentin Tarantino (Kill Bill Vols. 1 & 2, Pulp Fiction) helms one of the most audaciously inventive, eagerly-anticipated films of the year, Inglourious Basterds, coming to Blu-ray(TM) Hi-Def and DVD on December 15, 2009 from Universal Studios Home Entertainment. Starring Academy Award® nominee Brad Pitt (The Curious Case of Benjamin Button, Burn After Reading) in an audacious, adrenaline-packed, high-octane World War II revenge fantasy, Inglourious Basterds has been hailed as one of Tarantino’s most stylish and entertaining films to date. From its deceptively bucolic opening scenes to its incendiary final moments, Inglourious Basterds delivers a heady combination of fact and fantasy that never fails to surprise. Written and directed by acclaimed filmmaker Quentin Tarantino, Inglourious Basterds is available on Two-Disc Blu-ray(TM) Hi-Def, Two-Disc DVD Special Edition, Single-Disc DVD and download to own. Both the Blu-ray(TM) and Two-Disc Special Edition DVD come with a Digital Copy of the film for a limited time only just in time for the holiday season and over 90 minutes of startling and engrossing behind-the-scenes bonus features.

Brad Pitt shines as the bodacious American commander of a lethal team of Jewish-American soldiers known as “The Basterds” – whose exploits in occupied France strike terror in the hearts of the German rank and file and enrage the German High Command. The acclaimed cast also includes Christoph Waltz, who was named Best Actor at the 2009 Cannes Film Festival for his unforgettable performance as a charming but cunning Nazi officer, B.J. Novak (“The Office”), Diane Kruger (National Treasure), Eli Roth (director of Hostel), Melanie Laurent (Paris), and Michael Fassbender (The Bourne Ultimatum).

BONUS FEATURES
All three editions of Inglourious Basterds include:

Both the Two-Disc Special Edition and Blu-ray(TM) also come with:

In addition to the above features, the Inglourious Basterds Blu-ray(TM) Hi-Def release includes:

In the first year of the German occupation of France, Shosanna Dreyfus (Melanie Laurent) witnesses the execution of her family at the hand of Nazi Colonel Hans Landa (Christoph Waltz). Shosanna narrowly escapes and flees to Paris where she forges a new identity as the owner and operator of a cinema.

Elsewhere in Europe, Lieutenant Aldo Raine (Brad Pitt) organizes a group of Jewish American soldiers to perform swift, shocking acts of retribution. Later known to their enemy as “the Basterds,” Raine’s squad joins German actress and undercover agent Bridget von Hammersmark (Diane Kruger) on a mission to take down the leaders of the Third Reich. Fates converge under a cinema marquis, where Shosanna is poised to carry out a revenge plan of her own. …