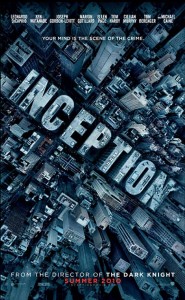 Inception tells us that an idea is much like a virus; once you claim an idea its continued spread will eventually overtake you. It is therefore fitting that Christopher Nolan’s film is more complex than a Rubik’s Cube that will consume every piece of your imagination. The “inception” he plants in you leaves you with the constant desire to pour over every inch of celluloid you just watched in a dark theater.

Cobb (Leonardo DiCaprio) is the best man for hire if you want to do the art of “Extraction”, taking an idea from within a target’s dream. Aided by his team which consists of his “Point Man” Arthur,  and his “Architect” Nash (Lukas Haas) he must take the idea from Saito (Ken Watanabe) , a shadowy business man who is the target for Cobb’s extraction.

You see, Cobb and his team trick the mark in their dream stage to reveal certain information, which then leads to the final heist of the important information.  Unfortunately, things do not go as planned, and his team must make a bargaining agreement with Saito. Saito offers Cobb and his team a new job, one that could get Cobb back to his children and the promise of money for the others. Cobb must do what is thought to be impossible, “Inception”, the act of putting an idea in a marks head.

With the aid of a new “Architect”, the person who designs the world the mark’s subconscious will inhabit, this time a young and promising architect cleverly named Ariadne (Ellen Page; it should be noted that Ariadne is the “Mistress of the Labyrinth” in Greek mythology.”), a “Forger” named Eames (Tom Hardy), and a “Chemist” named Yusef (Dileep Rao).  Together Cobb and his team must delve deeper into the subconscious mind than anyone has traveled before, to pull off “Inception”.

To say that Inception is layered would be an understatement. Layer upon layer stacks neatly upon each other, and constantly challenge the viewer to find their bearings as quickly as the characters on screen.

The film’s influences are many, and it is no doubt many people will compare it to The Matrix, but make no mistake, The Matrix is very straightforward compared to Inception. Think of Inception as if the Wachowski brothers added in the works of M.C. Escher, a Rubik’s cube, and a sliding block puzzle. Sure it doesn’t quite have the action sequences that so clearly defined The Matrix as an instant action classic, but it will leave audience with much of the same experience.

Christopher Nolan is assuming a place in Hollywood lore that not many ever get to, a director whose name before a feature carries weight. He joins the very few including names like Spielberg, Scorsese, and Coppola. A name that when preceding a film signifies a quality film that aims high both in audience appeal, and intellectual pursuits.

Nolan’s vision is aided by a talented cast that helps lend an air of believability that is very much needed in a film that readily combines dreams and reality. Without the intense focus of the acting, the film could have very easily folded upon itself. The characters talk about fantasy terms without batting an eye, and help us through our suspension of disbelief that we might be able to control and walk through dreams to obtain ideas.

Leonardo DiCaprio continues to cement his status as the best actor of his generation by continuing to take challenging roles. Many actors must dip into the realm of mediocre film to keep their career alive, but DiCaprio has an endless stream of interesting projects that is helped by the friendship of directors such as Nolan and Scorcese.

Ellen Page and Joseph Gordon-Levitt are both rising standouts in the film community that manage to be great supporting actors. Neither of the young performers manages to be lost in a veteran cast that includes great actors such as Michael Caine, Ken Watanabe, and Marion Cottliard. Rising with them is British actor Tom Hardy who could be experiencing a breakout performance on American shores with Inception.

It is hard not to be wowed by the visuals within Inception, and all of it is heightened by the fact that Nolan does not rely too heavily on the effects.  This film most likely contains more effects shots than any of his previous films, but he still does not use CGI as a crutch like many filmmakers do currently. It is a breath of fresh air to have the effects aid the storytelling, rather than being a consolation prize to make up for poor storytelling.

To top everything off composer Hans Zimmer creates an amazing atmospheric score that resonates throughout the film.  I think it is quite possible that Zimmer has outdone himself. He has always been a top notch cinema composer, but his scores adds yet another layer to the rich storytelling in Inception.

Inception manages to be one of the most complex films ever marketed as a blockbuster film. I felt refreshed that I didn’t see another rehashed concept, and something that didn’t insult my intelligence. For as deep as the story is, it still manages to pull off suspense and thrill effortlessly, and create a puzzle on screen unlike anything I’ve ever seen.

Inception, the latest from Christopher Nolan, is nothing short of phenomenal and is a prime example of why we go to the movies; to have an experience almost none of us could ever even imagine.

I am not going to even try to explain the plot as it is both complex and better experienced as virgin as possible. But in short it follows a team of contracted thieves, led by Cobb, who steal information from people’s minds by sedating them and creating a dream world which allows them to extract their target mission. When the team is recruited to plant an idea in a mark’s mind, through Inception, they will have the greatest challenge they have faced yet.

The film is beautiful and innovative in both its visual and storytelling devices and while it may seem too expository at times it is need because we have nothing to really compare this too. I am almost always getting upset with telling instead of showing, but the telling is always necessary and Nolan does the showing, brilliantly, and leaves plenty to the viewer’s imagination. But what Nolan does best is inspire the imagination and them proceeds to blow a hole out the back of it.

While the plot is complex it is more than followable but it will demand your attention. You will catch on to little things before they are revealed and there will be reveals you won’t see coming, and in the end a quick conversation with some friends will help you unravel anyone’s issues/confusion.

Any issue I have with the film I don’t think will last the second time around, and there will definitely be at least one more visit to this well, and while things are a bit slow after the opening scene we have to go through the paces so that we can experience the film at its full worth.  In fact, I would have liked to have seen a lot more in these “training” scenes as the more we get in the dream world the better.

But really, just go get in line now, I can’t heap enough praise and this is a film that is only going to get better as we get to digest it more in our minds and on our return visits to the theater and the subsequent Blu-ray.  It is just so damn nice to see something original, engaging, and keeping you on your toes with what is going to happen next as things unfold.  The movie compels from start to finish and Hans Zimmer’s score does a great job at keeping us drawn in as it rarely stops, which I loved.  The sound design is also superb and the visual effects are amazing as they blend seamlessly into the action.

The acting in the film is also top notch with DiCaprio leading the way as the complex and dark past filled Cobb.  Joseph Gordon-Levitt continues to shoot his star higher into the sky and he is going to be a force to be reckoned with to the general public sooner rather than later.  Tom Hardy also does a rousing job announcing himself to the mainstream as Eames a wiseass forger on Cobb’s team. Marion Cotillard is creepy and unsettling as Mal, Cobb’s wife that holds him deep in the darkness. Ellen Page doesn’t get a whole lot to do but is good nonetheless in her role; though her character’s bond to Cobb is the biggest stretch of the picture. Cillian Murphy is diverse as his character is taken down the rabbit hole and he has to wear a lot of hats as they go deeper and deeper into his character’s sub conscious. Ken Watanabe also shines as always in his role and like Page I wish he had a bit more to do.  The cast is great all around and they help bring this great world to life.

In the end, Inception is right with Toy Story competing for the best film of the year and will go toe to toe with most everything released this year.  I can’t wait till Nolan is done with Batman so he can continue to pump out original material like this that reminds us why we go to the movies.  Beautiful to look at, fun to watch and figure out and engaging from start to finish, Inception is a great film experience that is not to be missed.