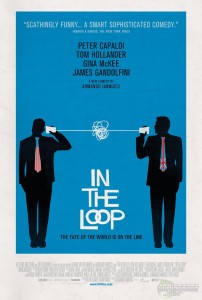 This political satire of the American and British government’s reaction to an impending war in Iraq is quite funny at times but ultimately feels like Christopher Guest lite.

Following a set of individuals in and around the governments of both the American and British states, with individuals both for and against the war, we get to see a little bit of everything. The stories closest thing to a main character is Simon Foster who is a Secretary of the British Government who makes a comment on the impending war in the middle east as unforeseeable which sends the press and governments into motion over the events we get to see in the film as everyone tries to spin things the way they want. The Prime Ministers watch dog, Malcolm Tucker, is all over Simon trying to get him to fall in line while in the meanwhile an Assistant Secretary of Diplomacy for the US, Karen Clarke decides to try reel in Foster as a British ally in her fight to avoid war in the Middle East. Karen is in cahoots with a U.S. General who is behind her call for peace and they begin to use Simon as a pawn in there play as Tucker tries to do the same while he spins.

Now, the film moves along franticly and can be a tad bit confusing from time to time with everyone playing one another and a large ensemble to try and keep track of. If you don’t allow yourself to get overwhelmed you can keep it all in line, for the most part, and get what is going on in the picture. The characters in the film are played to types much of the time as well, which is ok since this is satire, but it also helps us keep track of who is who and what not since you can just be like, “oh this is the war mongering douche.” Even though the characters are types, that doesn’t mean that they are not fun and interesting. Both Simon Foster and Malcolm Tucker are quite enjoyable to watch and are often hilarious as they are the real standouts of the film.

Like I mentioned before, the film is a bit all over the place, but the frantic setting and push of the governments agendas in the film lend to the craziness of everything going on and makes the silliness of seem more acceptable as people run around like chickens with their heads cut off. I think one of the things I enjoyed most about the film was the bits of silliness thrown in that tends to come with British humor. There are also a considerable number of great one liners throughout the film and the Malcolm Tucker character is delightfully verbally profane.

The director, Armando Iannucci, does do a very fine job at touching on a number of political ideas and the idiocy of it all at times. There is a wealth of good ideas and jokes here that are executed fairly well for the most part, but few feel like we are breaking any real new ground. The film does drag a bit towards the end though and did have to struggle to hold your interest. Luckily, there was usually a good bit or gag right around the corner with these lulls, but the film could have been probably a bit finer tuned.

The cast has a number of winners in it with Peter Capaldi as Malcolm Tucker being quite the stand out. Loud, obnoxious, and brutally honest he is a joy to watch and you can tell he is having a blast getting to play the guy everyone hates to be on the other side of but is too scared of him to do anything about it. Tom Hollander is delightfully clueless as Simon Foster and he slips in a number of great lines throughout as the soft spoken pawn. James Gandolfini is fine as the U.S. general in the picture but I wish he had a little more to work with personally. David Rasche is fantastic in the film as well in his brief appearances as a war supporting secretary that has a secret committee that Karen is trying to get on to. Steve Coogan also shines as an upset constituent of Foster who is concerned about his mother’s safety due to a faulty wall.

In the end, In The Loop is a fairly successful comedy that just never feels like anything special. It doesn’t hold a candle to the best of the mockumentary style films out there, but isn’t poor by any means. There are a number of great laugh out loud moments throughout the film and a few great performance by those involved as well. The film real hits the nail on the head on a number of occasions when skewering the modern political scene but as a whole doesn’t bring anything revolutionary or just knock it out of the park. Either way, if you are a fan of some good British comedy, political satire, or mockumentaryish style films, (there are no personal interviews, think For Your Consideration) then there is probably something here for you, so at least make a rental out of it because there are some points that really shine.