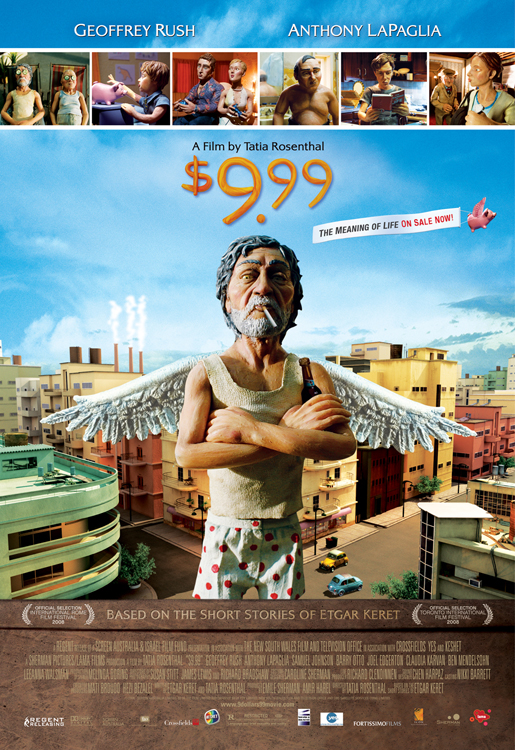 This latest stop motion animated drama is an odd, lonely, and somewhat interesting tale that doesn’t do anything special and leaves you a bit bewildered with everything.

The film focuses on a set of individuals living in an apartment building as they all deal with issues in their lives while also coming rather loosely connected to one another. There is a man who lives with his son that is searching for direction in life through a series of 9.99 books in a catalog while his dad copes with his wife having left him years ago and the recent suicide of a homeless man indirectly because of him. The other sibling in this family falls for a new tenant who is a spokesman on TV and she has a thing for hairlessness. A near engaged couple deals with an impending break up as the young man copes by smoking weed, drinks, and chows on junk food with three miniature people. There is also a boy who becomes attached to his piggy bank. And lastly, an old man meets an angel and the two begin to bond over discussions on life and what not.

At a brief 78 minutes the film moves along fairly quickly, though a scene or two still drags from time to time. The animation in the film is done well enough though and the look of the film is quite good with some really interesting and well done shots. The thing that makes me curious is the filmmaker’s choice to do stop motion at all for this picture in the first place. The only sequences the style lends itself to are the miniature friends, the angel’s wings, and a short bit at the end of the film revolving around some “chairs” but I can’t really see how this would have killed their budget to go live action.

The world is filled with some interesting characters though and the film does make you laugh on a few occasions but there were just too many “huh?” moments littered throughout the film and a couple of out there ideas that never are really explained nor giving you anything to really work with to decipher there meanings. Now, I am not saying I need everything spelled out in every film, but I would at least like a hint or two at what you were going for most of the time, or else make the idea so weird and clever that I don’t really care.

The voice work in the film is of very good quality though and the actors bring a lot of good humor and life to even the oddest of characters. Geoffrey Rush is quite snide and good as the oddest angel you will ever meet. But sadly, his character is not wrapped up very well, like many plot points, and it kind of robs the character a bit; but if mystery is appropriate for anything in this film it would be this angel. The rest of the cast is applicable as well with no one really standing out or showing weakness among the cast. The animators also deserve a shout out here again as well as they really did craft a fine film successfully individualizing a large cast of characters and bring to life all the weird ideas involved in this production.

In the end, $9.99 is an interesting film that works rather intermittently but does gel as a whole. Getting snippets of these characters lives in the midst of learning some life lessons is an interesting premise and executed ok here, there is just far too much left unexplained and open to too broad of an interpretation. The oddity of the film is also a bit hard to get past and not leave one befuddled but at least it tries to be something different and not conform to the mainstream; if only its messages were just a tad more concise. I do appreciate the filmmakers attempt at creating adult cinema through animation, and they partially succeed here, though the film is just a bit too abstract to be super accessible and enjoyable as a whole I feel.