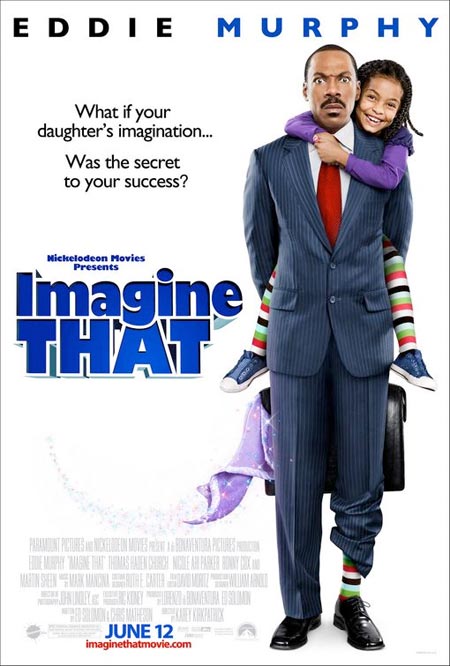 If I were to guess I would say that Eddie Murphy most likely likes those paint by the number paintings.  Why would I say something like that? Well, it seems a lot of his movies have followed the same paint by the numbers type film making that after a while it just gets boring. “Imagine That” is just another by the numbers film, that has a little potential but overall doesn’t give us enough comedic effort to warrant the ticket price.

“Imagine That” tells us the story of a top level  financial executive, Evan (Eddie Murphy) who was once the top dog, but is now being shown down by the crazy, over the top, but effective Johnny Whitefeather (Thomas Hayden Church).  On top of the stress at work, he has a daughter, Olivia (Yara Shahidi),  who won’t let go of her imaginary friend and her security blanket.  In the pivotal moment in the film Evan realizes that the things he is being told about by the imaginary friends is really an insight to the marketing. Olivia is able to give him a heads up on mergers, scandals, and much more. While using his daughter and her blanket he begins to realize the relationship he has been missing out on.

It’s really a story that has been told many times before in a children’s film. Father is too occupied with work to give kid all the attention he needs. Extraordinary circumstances give father more time to spend with the child. In the end father realizes how much of an idiot he was and he should have been more involved with his kid in the first place. There is nothing in this film that gives it originality. The story is probably the weakest point of the film.

The strongest point in the film is newcomer Yari Shahidi as Olivia. She holds her own in the film, which is a big accomplishment when working with as big of a personality as Eddie Murphy. Add in the fact that Murphy seems to chew on the scenery in this one, it makes it even more impressive. Murphy at one moment goes for scencerity and the next he is so comedically over the top that the only people who appreciate his humor in the audience are the ones who have to be brought in by their parents. It has been proven by many recent films that they can entertain both child and adult alike.

It’s upsetting that an actor that seemed so much on the rise in the past few years, Thomas Hayden Church, is in such an awful role. His role as the antagonist in the film is so annoying for all the wrong reasons. Instead of having a crafty adversary in Whitefeather he has a stupid faux-Native American who can only make him look better with his stupid analogies about soaring eagles and roaming bears. It’s really hard to suspend your disbelief that anyone would take a character like this seriously.

Don’t get me wrong though. This movie isn’t aimed at the adult intellectual, it is strictly kid fare. Studios can get away with pumping stuff like this out, because it is going to seem fresh to young kids who haven’t been exposed to this cliched of storytelling over the years. Anyone of us can think back to a film from their childhood that they loved, but if they watched today you would balk at the ridiculousness of it all. So, there is a good chance that if you have children it might be a good family outing for the weekend. It will leave you entertained, but most likely won’t have you screaming it’s praises.