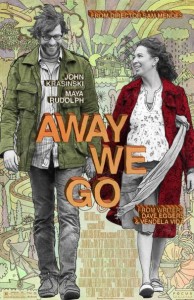 “Away We Go” is a great example of when to not judge a book by it’s cover. It is being cleverly marketed as an indie comedy similar to the way “Juno” was a year and half ago.  This film maintains a lot of the indie cinema mainstays like indie rock soundtrack, quirky characters, and even more quirky situations. It makes every peice of it work because of the extremely grounded main characters.

Burt and Verona are an unmarried but faithful couple who have found out they are expecting their first child. When visiting Burt’s parents they get yet another suprise, his parents are moving to another country before the baby is even born. Quickly they realize that there is no ties to the area anymore with Burt’s parents gone they set out on a trip to find a new home to raise their child. Along the way they meet many different characters, some over the top and quirky, others that bring such a dash or realism you might get your heart broken.

What makes this film work is the performances of John Krasinski and Maya Rudolph.  They are entirely believeable as their on screen couple and they portray a more realistic relationship than I’ve seen in a while. Complete with little arguments and affectionate moments. It’s refreshing to see Krasinski finally play a role that isn’t just a repeat of Jim from “The Office”. Both actors play off each other so well and never seem to over do the comedic elements granted to them in the script. In addition to the leads, every single supporting character is brilliant. Allison Janney’s Lily and Maggie Gyllenhaal’s LN might be the hardest to swallow, but you’ve probably met someone just like them before to lend a little believability to the roles. Melanie Lynskey and Chris Messina’s role as husband and wife might be one of the most touching parts of the movie.

Dave Eggers and wife Vendela Vida should get major credit for crafting such a great script peppered with a lot of great laughs and just enough sincerity to really ground the whole movie. The script really starts out with a lot of laughs and as we get to know the characters it slides into another gear and gives us moments that change the characters profoundly. Eggers is also receiving a screenwriting credit for “Where the Wild Things Are” later this year, so we can only hope that he continues his run in with film.

This seems a major departure from Mendes’s other work.  This is his first foray into this genre and I’m very surprised to see how well it suits him. The pacing of the film is brilliant. Not once did I find myself bored, in fact by the time it ended I was a bit sad that it was over because I wanted to see more of the characters and their life. Mendes is great in keeping the tone of the film light for the first part of the film and slowly giving us time to ease into some of the emotional wallops.

“Away We Go” may not be a film for everyone, but it is something I highly recommend. It’s a little upsetting that a film like this only gets a limited release where so much other drivel recieves a wide release instead. If you can make it out to a theater playing it, go see “Away We Go”. Expect to see some over the top characters, but enjoy it all the same.

Sam Mendes quickly returns with his latest film which is the anti thesis to his previous Revolutionary Road and the results are a fantastic look at parenting filled with heart, humor, and soul all rounded out by fantastic performances from everyone involved.

Burt and Verona are in love, they are also having a baby, but they aren’t getting married either; and none of these things are really creating much of a problem either. The problem they really have is finding a home. The couple moved close to Burt’s parents because they wanted to be a part of their granddaughter’s life, or so Burt and Verona thought. When those plans go south the two endeavor on a road trip searching for a possible home for them to settle down in and they decide to head to places wear they know some family and friends are already in place. The trip takes them through a number of parenting experiences as well and it helps the couple formulate how they want to raise their family and shape their lives.

To spoil anymore in this film would be a shame for the viewer. It never follows convention and is a refreshing take on a “romantic” story that doesn’t feel cookie cutter and pander to our intelligence. In fact, the humor in this film can be quite high brow at times but has plenty of broader humor to go along with it as well. And even though there are plenty of laughs in the film, the film has a rich soul and heart that this couple carries that we can just feel and feeds us with its warmth and had me smiling from ear to ear from nearly start to finish.

Mendes film is a refreshing look at love and it’s so nice to see a film that doesn’t fall into the pitfalls of convention. It never has “that scene” that you find in most films where we have to tear apart the main duo in the film and none of the scenes or gags are found in any film I have seen. The dialogue is also rich, surprising, and often hilarious and props must go out to Dave Eggers and Vendela Vida who create a quick, sweet, and almost never dragging picture for Mendes to work with.

The actors in the film also elevate to levels you wouldn’t expect, with the leads both probably turning in the best performances of their careers. John Krasinski and Maya Rudolph play Burt and Verona and their chemistry is wonderful. Not once do we not buy them as this amazing and in love couple as they bounce back off each other with ease. Krasinski finally breaks out of being Jim from the office and molds this wonderful character that has some amazing range and will have you busting out laughing any time he tries. Maya Rudolph also brings a tenderness and maturity to the picture while still giving us plenty of humor to boot. She really steps out as a potential star and I look forward to her getting some more serious work here in the future. The cast is also full of great work from a couple of actors in each city that we visit. Catherine O’Hara and Jeff Daniels shine as Burt’s parents and are the pair you wish we could have had more of the most in the picture. Jim Gaffigan and Allison Janney play a pair of mediocre parents in Phoenix and are the polar opposites of one another seemingly in the short time we get with them; with Janney’s over the top turn being hilarious to almost being too much. Maggie Gyllenhaal creates a wonderfully contrived and deep parent that just makes you shake your head at the absurdity of everything that pours out of her mouth. Chris Messina and Melanie Lynskey are a great poignant and heart aching couple that are also full of life and might share the most aching moment in the film. Lastly, Paul Schneider is good as an abandoned husband and really captures the struggles of single parenting and the fear it can bring to a couple.

In the end, Away We Go is a wonderful film that sticks with your and keeps you entertained from start to finish. Full of laughs, heartfelt moments, and the feeling of true love between Verona and Burt that just pops off the screen. Unconventional and completely refreshing there is a whole lot to love in this picture and seems like a lock for my top ten at the end of the year. The film might catch you a bit off guard with a bit of a tonal change in the third act, but it is all a part of this amazing couples journey and you will feel that finding home can be an important and pivotal moment for a family to begin their life together. Do not miss this film!

Away We Go is an A