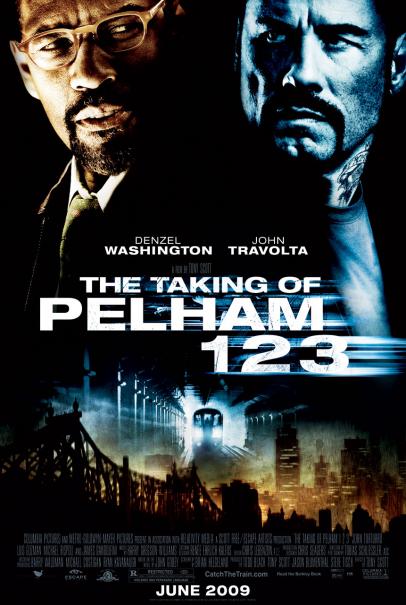 Tony Scott’s latest with frequent collaborator Denzel Washington is a mediocre affair that is poorly written and can’t even muster much style out of Scott either.

Walter Garber is introduced to us as an everyday transit authority civil servant that mans and maintains the New York City subway traffic so that it flows with ease and there are no delays for the many commuters it sees daily. Ryder and his crew are taking over the Pelham 123 train and after stopping it mid tunnel they detach the lead car and Ryder gets in touch with the sectors operator, Garber. Ryder demands ten million for the hostages he has on the train car and that he will execute one per minute the money is late. The police and mayor are both pulled into the fray and while the police have position on the train car, they are holding out for the possible negotiations; that don’t go entirely too smoothly. Garber and Ryder begin a series of discussions that expose them both for more then they led on to believe while the lives of the hostages are hanging in the balance as they wait for the money to arrive and more plot ensues.
No the problem with all of this is nothing makes logical sense with the way they handle the situation at the police level and Ryder is written so poorly it hurts sometimes. The decisions made by the officials are just so dumb and make no sense you will just find yourself saying, “What?” over and over again. I mean, things like listening to the biggest idiot in the transit department instead of the one police intel is giving, or the complete lack of accountability or compassion anyone seems to have for the loss of life taking place in the picture. Throw in a stereotypical and uninventive chase like segment with the rushing of the money, and the film even calling out the stupidity of some of the films own actions, its hard to really get too invested or take anything too seriously ever.
Plus, on top of all of this, Ryder’s character lacks so little originality and just awful dialogue he never achieves anywhere near the level of character the writers think he is. They are going for this crazy and darkly humorous guy that you are supposed to kind of like and get a kick out of as a sort of anti-hero to some extent, but he is so cold blooded and repetitive he just becomes almost eye rolling obnoxious and almost completely unentertaining.. Even outside of Ryder, the lines are rather lame and corny with only a couple jokes and one liners really working in the film at all.
The film is more subdued style wise for a Scott film but the production value is quite high on the picture to boot. But like I said, the good looks and high caliber actors can’t really elevate this picture to anything above what it is, a mediocre tale with little flare, fun, or excitement. The film is also rather dull and simple for most of the film, being pretty much a back and forth between the transit headquarters and the train car conversation; with actually a seemingly fair amount of repetitive shots.
The actors in the film also do nothing special in the picture with nobody standing out even from the rather average turns in the film. Denzel Washington plays Garber and does the best of the actors involved, though we have seen plenty of better work by him in a number of films. James Gandolfini pretty much mails it in with nothing to do even really from the script that is even weaker from a character standpoint then it is story and dialogue. John Turturro again has nothing to work with and plays a very dull and straight forward hostage negotiator. Lastly there is John Travolta as Ryder, who is just not that convincing as the tough talking crazy genius that Ryder is supposed to be. Like I said, the script is awful to begin with, but Travolta doesn’t bring a whole lot to the table either delivering ever single line of motherfu**er, which is uttered a million times by Ryder much to our chagrin, exactly the same every time; did the writers not have a thesaurus?
In the end, The Taking of Pelham 1 2 3 is not one of Tony Scott’s best efforts and doesn’t have the thrills, humor, or social awareness it thinks it has going for it. The script is awful in so many ways, the action is non-existent and poorly conceived and the attempts at humor fail almost every time. Even a group of quality actors turn in rather lame performances all around and are unable to elevate the material one bit. The film has a moderate entertainment value, and wasn’t the worst thing in the world, it just doesn’t really work as well it thinks and one can’t help but notice things falling flat. I can’t give you much of a recommendation for this film, even if you are fans of Scott, Denzel, or Travolta. If you catch it on cable it might hold your interest, but don’t go out spending your money on this there are far better films you could be seeing at the theater right now.
1 2 3 is a D-