If Ever a Wonderful Show There Was… WICKED Is Now Playing at the Fox Theater in St. Louis 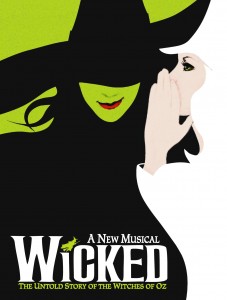 You would be hard pressed to find someone who isn’t familiar with “The Wizard of Oz,” and of Dorothy, Toto and a mystical land “Somewhere Over The Rainbow.” But this is not that story.

“Wicked” is the story of Elphaba – better known as the Wicked Witch of the West. But according to this show, based on the best-selling novel “Wicked: The Life and Times of the Wicked Witch of the West” by Gregory Maguire, this green-skinned anti-hero has been getting somewhat of a bad rap. From the beginning, we learn of the struggles that Elphaba faced growing up as a child who looks different than everyone else. While she is going to school at Chiz University, she meets Galinda – who would later be known as the Good Witch of the North. The two are polar opposites; where Elphaba is kind on the inside yet green on the outside, Galinda is beautiful yet quite shallow and self absorbed inside. Through a series of complications, the two are forced to become roommates and have to learn how to get along. 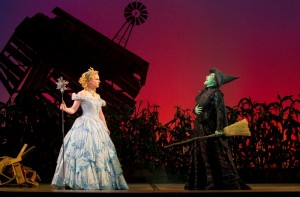 I have to first of all give credit to the incredibly clever and original story written by Gregory Maguire. The premise for “Wicked” is intriguing, and makes for a remarkably entertaining translation to the stage. Screenwriter Winnie Holzman did an exceptional job with the book, keeping the story well-paced and the transition between scenes seamless. Stephen Schwartz, who is responsible for writing the music and lyrics for the show, did an amazing job working in the characters and scenery that we know and love. He took the land of Oz, and everything we know about it, and gave us an entirely new experience through songs that fit perfectly. I have to say that “Popular” and “Defying Gravity” are two of the most catchy songs of any stage show that I have ever seen. 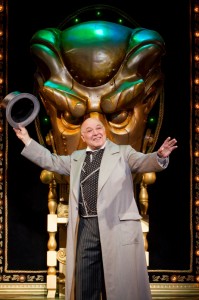 I was very impressed with the acting and performances in the show.  The casting was great, and I thought that the cast really fit all of their roles.  The show I saw was unique in the fact that the role of Elphaba changed around half-way through the performance.  Vicki Noon started off the show, and was doing an exceptional job.  I particularly remember her powerful performance of “The Wizard and I” early in ACT I.  But before the start of the song “One Short Day,” Vicki started to feel ill.  She wanted to make sure that the audience was able to experience “Defying Gravity” the way it was meant to be performed, so Anne Brummel took over at that point.  The change was incredibly smooth, and Anne’s voice and acting was equally as enjoyable. She did a great job taking over in a tough spot, and carried the rest of the show with what appeared to be no noticeable problems.

Natalie Daradich did a great job as the bubbly and narcissistic Galinda.  The way she played the character was very familiar to the performance of Kristin Chenoweth in the original Broadway run.  Galinda is responsible for much of the humor throughout the show, due to her ignorance and vanity.  Her chemistry with Elphaba is spot on, and made for a great performance.

Marilyn Caskey plays Madame Morrible, a character that you love to hate.  From the very beginning, she has an intimidating demeanor  that plays to the role perfectly.  Don Amendolia is the Wizard of Oz, a character that is similar to that played by Frank Morgan in 1939.  The Wizard in this show is a caring person beneath his guarded exterior, but is much darker in this story than most will be familiar with.  Chris Peluso as Fiyero was fun to watch, and was especially interesting to observe as a love interest of the Wicked Witch of the West.  That is something that you would never expect to see before this story.  One character that we know of, but really know nothing about before this show, is Nessarose.  Played by Kristine Reese, this is Elphaba’s sister who would eventually come to be known as the Wicked Witch of the East.  Again, a very interesting twist on a beloved story. The ensemble did a fantastic job throughout the entire show, as they changed costumes constantly and filled the stage with dancing. 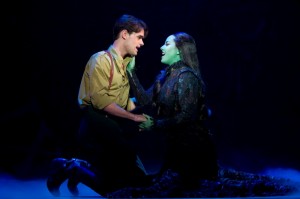 The stage design and costumes for “Wicked” are absolutely magnificent. First of all, the entire stage is crafted to look like the inside of the Clock of the Time Dragon. At the top of the stage is the gigantic dragon with glowing red eyes, which moves and breathes smoke. It is most-impressive. The rest of the show is filled with intricate set designs. Everything from the Wizard of Oz’s machine that he hides behind, to the lights and glowing scenery of the Emerald City, are simply jaw-dropping. And there are so many costumes that the actors constantly switch in and out of, that is a wonder how they can possibly keep everything in order. There is a particular time in the show where we see how the flying monkeys came to be, and the transformation is so surprisingly flawless that it makes you wish you could press rewind to see how it happens. And the way that the show transitions between Munchkinland, Chiz University, the Emerald City and the rest of Oz is great.

I have wanted to see this show for a long time, and it most certainly did not disappoint. It was everything that I expected it to be, and more. The performance of “Defying Gravity” was just as impressive as I imagined it would be, after hearing the song for several years now. It is a great feeling when you can leave the theatre, and want to buy a ticket to the next performance. “Wicked” is truly that kind of show, and is something that you do not want to miss while you have the chance to see it.