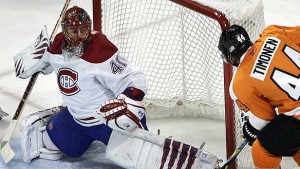 In my fury over the result of the game between the United States and Slovenia this morning and afternoon, I forgot to mention a very important bit of news for hockey fans in St. Louis.

The Blues may have pulled off one of the bigger trades of the off-season, trading for Montreal Canadians goalie Jaroslav Halák, giving up two prospects, Lars Ellers and Ian Schultz.

For the  Blues, trading Lars Ellers is a pretty significant move, as they considered him to be a central part of their future, a la David Perron, T.J. Oshie, Erik Johnson, and Patrick Berglund. If he turns into a potent scorer for Montreal and Halák is anything less than a superstud for the Blues, fans will be left slapping their heads in frustration, as the Blues haven’t been the most dangerous scoring team in the league recently (our two leading goal scorers, Andy McDonald and Alex Steen, had 24 goals apiece). Ian Schultz is projected to be a third-liner at best.

But this chance was too good for the Blues to pass up. Halák was absolutely dominant in the playoffs this last year, almost single-handedly willing the Canadians to the Cup finals. He’s young (25) and obviously pretty talented. Chris Mason and Ty Conklin aren’t getting any younger, and the Blues haven’t had a franchise goalie really since Curtis Joseph. The Blues have struggled in recent years to develop goalies, so if Halák can live up to his billing, the Blues have a very, very bright future ahead.

Sidenote, this means that with Conklin signed to one more year, Mason will no longer be with the Blues. I’m a little sad about this. Mason was a solid goaltender for the Blues, if not spectacular. He had save percentages of .916 and .913 in his two years here, respectively, and he looked like he ate small children for energy. 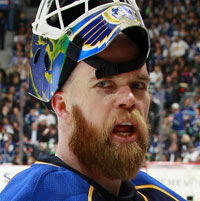 Spotted in the stands: dinner.