Sam made national headlines on February 9th when he publicly announced he was gay, likely making him the first openly gay NFL player after this May’s draft.  Since Sam made his announcement, he has received an outpouring of support.  In a 24-hour period, he saw the number of twitter followers he had go from 14 to over 50 thousand (to date he is nearing 100 thousand followers).  This perspective was shared on Saturday as many fans stated they were proud of Sam.  One woman commented, “I don’t really follow football, but I wanted to be here to support him.”  The spectators, reporters, and security will likely follow Sam through the foreseeable future.  It however, did not seem to faze him on Saturday as he took time to shake hands and take pictures with fans throughout the autograph session and simply stated, “It is what it is.”

Sam’s notoriety off the field will hopefully not overshadow his accomplishments on the field.  This sentiment was echoed by Debbie Houston, owner of St. Louis Sports Co., who hosted Saturday’s event.  “We had planned on having Michael Sam in our store before he even made his public announcement. So for us, having the 2013 SEC Defensive Player of the Year meant a whole lot more to us than his sexuality.” 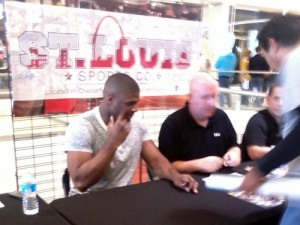 Michael Sam at the Signing in Chesterfield Mall.

Sam just completed his senior season for Missouri and was named a consensus All-American, the SEC Defensive Player of the Year, and First-Team All SEC.  He amassed 48 tackles, 19 for a loss, 11.5 sacks, and forced two fumbles.  Initially Sam was projected to be a late third- or early fourth-round pick, however, according to www.SI.com, several NFL executives and coaches feel that Sam’s announcement will hurt his draft stock, possibly dropping him to the fifth-round or later.  I asked some of Sam’s fans what impact they felt his coming out will have on his draft selection.  Bob Barnes, a Mizzou season ticket holder, stated, “I’m torn on it.  I think it will affect him in some places but not in others.  A GM knows his locker room and will have to decide how it will affect the locker room.  San Francisco and Atlanta may be good fits for Sam because there are a lot of Mizzou alumni on those teams that could offer support.”

Sam’s draft position may also be reduced by a disappointing performance at the NFL Combine held last month in Indianapolis.  Sam ran a 4.91 40-yard dash, had a vertical jump of 25.5 inches and bench pressed 17 reps of 225 pounds, all below average for his position.  He also may be undersized to play defensive end in the NFL and will likely have to switch to an outside linebacker in a 3-4 scheme.  Even in that scenario, he will not be an every-down player but will primarily be used situationally as a designated pass rusher.   Sam did improve upon his Combine stats at last week’s Mizzou Pro Day, running a 4.73 40-yard dash, adding 5 inches to his vertical jump, and benching 225 pounds 19 times, but even with these improvements, he is ranked as the 183rd overall prospect (or late fifth round, early sixth).

I always think that making any kind of prediction is tough, especially ones that may be looking a few years down into the future, but I am going to put this one down in writing.  If Sam falls to the sixth round, some team is getting an absolute steal.  The man can flat out play football.  On a weekly basis, he destroyed SEC quarterbacks and linemen, many of whom will go ahead of him in the draft and at some point in the future will have to line up against him again.  I enjoy watching the NFL Combine — I do, the same way I enjoy playing all the “training” mini games in Madden, but that’s all it is, a guilty pleasure that offers a brief distraction from the real game.  I don’t put a lot of stock in combine numbers.  The 40 yard dash is completely overblown.  Before the combine, it is already known who is “game-fast” and who is not.  Try running the test in full pads with a football in one hand and the other hand holding off a 275 pound man who is trying to pull you down.  I do think the bench press gives a moderate measure of strength, but again, until the NFL drags a bench to the 50-yard line between the 1st and 2nd quarter and says “most reps gets the next touchdown,” the test doesn’t do much for me.  There are several top players in the NFL who are great football players yet underperformed at the Combine (Tom Brady, Drew Brees, Terrell Suggs, and Anquan Boldin just to name a few).  I would not be surprised to see Michael Sam join this list some day in the future.

My thanks to St. Louis Sports Co. for taking the time to answer my questions.  Be sure to check them out at https://www.facebook.com/StLouisSportsCo, where you can get more information on upcoming autograph events (Projected 1st round pick Kony Ealy and Cardinals All-Star 2nd basemen Matt Carpenter are both coming in early April).