Review: ‘Titanfall’ for Xbox One and PC 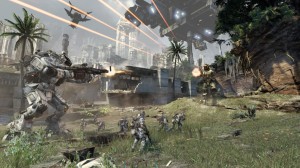 How do you effectively challenge the status quo in first person shooters? In a world full of “the next big thing,” it’s become increasingly hard to stand out. You have your next big Call of Duty, your next huge Battlefield, but what changes from game to game? Nothing, really. These games to stick to formulas and design choices that were hashed out years ago. And every once in a while, when the moons line up perfectly and a group of talented developers get together, you get something amazing. Something different. Or just different enough to make a stance in the mediocracy that has become the FPS genre.

Titanfall was born under weird circumstances. I like to imagine the developer, Respawn Entertainment, casted away resumes and applications to join the team in the same fashion the Spartans tossed babies off cliffs. Yeah. Anyway, the history and the birth of Respawn is just about as dramatic as it gets in the game development world. 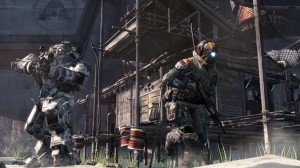 Almost the entirety of the Respawn team consists of ex-Call of Duty developers, Infinity Ward. Cast away after a dirty, long legal battle with Activision regarding the pay of some of its key members. So rather than being a victim of corporate shills, the founders—the people who made the original of Call of Duty, who found out how to print money—decided to do the most American thing they could do. They left. And when went to another huge corporation. But this one allowed them some creative freedom. That freedom spawned Titanfall. Are you happy now, Activision?!

Titanfall is a unique game. One that decided to defy a tried-and-true strategy for something different. For starters, the game has no real singleplayer campaign. The entirety of the game is based online in a competitive environment. Now when you boot-up the game for the first time, you’ll see a “Campaign” option, then you’ll scream, “Damn you, Justin! You lied to me!” But once you start playing the game’s so-called campaign, you’ll see that I was right. The campaign is a series of multiplayer missions with a short cut-scene that plays before each match. However this whole idea seems half-assed. Almost like EA (Titanfall’s publisher) was too scared to ship a game without a campaign, so they made Respawn just add in any resemblance of a traditional campaign to please investors. That’s my guess. The campaign follows two brothers on two different sides of a war. But if you asked me who the people were, or who was fighting who because of what, I’d tell you I have no idea. Respawn had a cool idea going and perhaps with more time, could have really flushed out this idea of a “multiplayer-campaign.” But as it presently stands, the only real reason to play the campaign is for the achievements and satisfaction of completing that portion of the game. I haven’t touched it since. 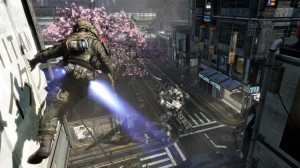 The real meat and potatoes of this game is in its traditional multiplayer modes. Titanfall has five different modes: Attrition, Pilot Hunter, Hardpoint Domination, CTF and Last Titan Standing. Attrition is like a standard team deathmatch, but with a twist. See, in each game mode there are enemies called Grunts and Spectres; they are AI-Controlled enemy units that are used for a couple of things. In Attrition, Grunts are worth 1 point and Spectres worth 2. Pilots, which are other players, are worth 4. The goal is for your team to get to a cumulative total. Naturally, the team that reaches that total first, wins. Pilot Hunter is the same as Attrition, but Grunts and Spectres don’t count towards you score, only Pilots do. Last Titan Standing is a mode where Pilots spawn in their mechanized behemoths called, you guessed it, Titans. The goal is to defeat all of the opposing team’s Titans. The other modes speak for themselves; Hardpoint Domination is a game-type based on control points across the map, and CTF is, well, CTF.

Titans are what one of the many parts that make this game just different enough to keep things interesting. There are two parts that make this shooter “different.” One is the free-running you can accomplish as a Pilot. This gameplay mechanic allows Pilots to traverse the levels at speeds and mobility not available to the Titans. It’s incredibly intuitive and easy to pick up, yet complex enough to take time to truly master. The second part of this game are the Titans. Playing as a Titan is like having two games in one. The combat and strategies needed when you engage in fights as Titans is completely different than fighting as enemy Pilots. Titans come in three flavors: Stryder, Ogre and Atlus. The Stryder being light and quick; The Ogre, heavy and strong; The Atlus, balanced and versatile. And then to add onto that, fighting Titans as Pilots is an incredibly fun, engaging experience as well. You’d think being a Pilot battling a Titan would be a fruitless effort, but it isn’t. Respawn has done well to balance things out. Because the Pilots can free-run their way around the map, they have the option to attack Titans in a hit-and-run fashion. And if you’re lucky enough, you’re able to sneak up to a unsuspecting Titan and “Rodeo” the back of it, rip off a metal panel, then unleash a barrage of bullets into the Titan’s CPU/Brain. Doing that for the first time is incredibly satisfying. 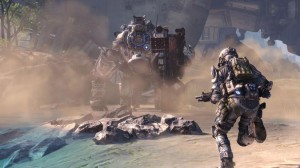 Titanfall manages to find a balance that appeals to a wide range of players. Because of the nature of the Grunts and Spectres, players who aren’t as good as some other players can still contribute to the fight. Rarely do you feel you aren’t doing something to help your team. Everyone gets points (Grunts are super easy to kill, and offer reduction time for your Titanfall, the badass animation that plays every time you call your Titan into the battlefield). Respawn has hit the nail on the head on what this genre was missing: originality, simplicity, teamwork and giant-ass robots. It’s not crazy game-changing, but it’s just enough to offer players a respite from the other shooters that dominate the market.

With the bold font on the front of the case, Titanfall screams at you that it’s something to be looked at. While it may be a hard sale to people who prefer a story to competitive multiplauer, I urge everyone to at least give it a try. Respawn has something special on their hands. They’ve created a Michael Bay film in video game form, all based in multiplayer. No predefined scripted sequences that play out the same every time. No. In this game each match is an unscripted sequence of beautifully crafted Titan-infused chaos.