The Hidden Gem – “The Newton Boys” 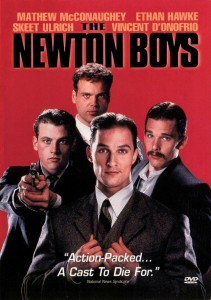 The hidden gem is never the popular film and usually not the best film, but it is always one of my favorites. It’s the film that I feel some people haven’t seen and that’s why I want to spotlight it so that maybe someone can find it and take delight in watching it like I have. This week’s hidden gem is The Newton Boys.

The four Newton brothers are a poor farmer family in the 1920s. The oldest of them, Willis, one day realizes that there’s no future in the fields and offers his brothers to become bank robbers. Soon the family agrees. They become notorious robbers, and five years later execute the greatest train robbery in American history.

The main reason I love this film is because it is so much fun. The brothers are played by Matthew McConaughey, Skeet Ulrich, Ethan Hawke, and Vincent D’Onofrio with Hawke really standing out. The chemistry between the four actors carries the movie along at a good pace that will keep you laughing at quite possibly the most charismatic bank robbers in American history.

A pleasant surprise comes during the ending credits as it shows one of the brothers being interviewed by Johnny Carson on “The Tonight Show”. This gives you a chance to see just how funny these boys really were.

Check out The Newton Boys on DVD now or if you have seen it already let me know what you think below in the comments.