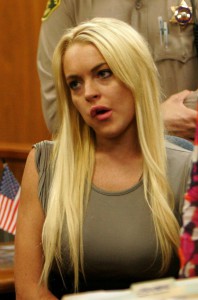 Accepting the fact that Lindsay Lohan has good behavior while she is in jail, she is likely to only serve 13 or 14 days at the Los Angeles Correctional Facility that she checked into this morning.

Due to overcrowding the once upon a time starlet may be release August 1st or 2nd, as long as she maintains good behavior. It has long been Los Angeles County jail system’s policy to release non-violent offenders early due to its severe overcrowding.

This wasn’t unexpected. Many people felt that Lohan’s 90 day sentence would be cut to at least a third once she was finally incarcerated, but not many would have expected her to be released after only two weeks of serving her sentence.

Lohan’s troubles aren’t over after her jail term though, within 24 hours of release she must report to her court ordered 90 rehab program which she will not be permitted to leave.