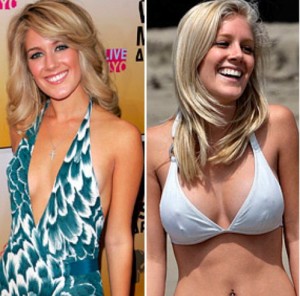 Can I really say I’m surprised? Reality stars are the bottom of the barrel for me. They contain no actual talent, and are only on TV because of their looks and narcissistic tendencies. So, the news that Heidi Montag has had over 10 plastic surgeries really comes as no surprise.

She told People magazine, “I (wanted) to feel better, to feel perfect. I was made fun of when I was younger, and so I had insecurities, especially after I moved to Los Angeles. They’d say nasty things. It bothered me. I just wanted to feel more confident and look in the mirror and be like, ‘Whoa! That’s me!’ I was an ugly duckling before.”

“My ultimate dream is to be a pop star. I’m competing against the Britney Spearses of the world – and when she was in her prime, it was her sex appeal that sold. Obviously, looks matter; it’s a superficial industry.”

I’m pretty sure people like her are what is wrong with the entertainment industry today. She thinks that having killer looks automatically means that she will be a huge pop star. She also things that instead of hard work to maintain a fit body, a few thousand dollars thrown to plastic surgery would be much better.

I really hope the age of the reality star is coming to an end. That is the optimist in me thinking, but the realist in me tells me that people for some reason are interested in beautiful stupid people who are put in front of a camera.

I feel it should be noted that Heidi was a good looking girl before all her plastic surgeries, but unfortunately she was too insecure and continues to find solace in unnecessary surgeries. Hopefully people will ignore her and instead maintain healthy body images about themselves.