ReviewSTL was in Las Vegas for the Gamestop Expo last week, and all the big names you’d expect were there – Microsoft, Sony and quite a few developers and publishers showing off their latest and greatest. But the main attraction of this event was to show the general public the new consoles up close and personal. 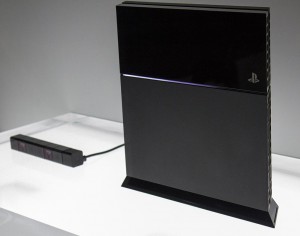 For one of the first times stateside, the general public (myself included) would get a firsthand experience of the new consoles. First up is Sony’s PS4. Now you’d think Sony would go all out, showing the best the console could offer, instead they had two very generic demos for the public: Octodad and DriveClub. Where’s Killzone: Shadowfall? Killzone is Sony’s bread and butter; it’s what will bring those very important “early adopters” in. Sadly, Shadowfall was nowhere to be found.

Octodad is a fun, graphically simple and quirky indie title, and DriveClub was a generic unimpressive racer; hardly anything groundbreaking. I expected more.

So what about the hardware?

First up, the controller.

It’s amazing, your hands naturally fit around the new ergonomic design, causing your fingers to rest on the newly concave L2 and R2 triggers. Gone are the DualShock 3’s “squishy” triggers. The DualShock 4’s are snappy and springy. The thumbsticks are concave as well, and are now spaced more widely to better fit your hands. The controller feels great and those worried should rest easy. Sony has put some good thought into the redesign.

The console box itself is sleek and contemporary. There’s not much more to say than the pictures can suggest. It will fit perfectly next to your PS3, cable box or – gasp! – your Xbox One. 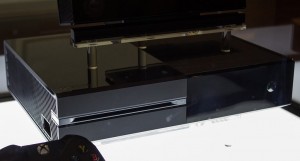 The Xbox One was also on display – showing games like Forza Motorsport 5, Ryse: Son of Rome, and The Crew.

Two of those three games were actually running on Xbox Ones (Forza 5 and Ryse). The games were smooth and pretty to look at, but hardly anything warranting a $500 day-one purchase.

So what about the redesigned Xbox One controller? A-freaking-mazing.

The Xbox team has outdone themselves. The controller feels amazing in your hands, and the tiny tweaks only improve an almost perfect controller. Also, the D-Pad is clicky and tactile, finally worthy of your next-gen fighter of choice. However, the biggest improvement is the addition of rumble motors within the LT and RT triggers.

You wouldn’t think this would change the game, but it does.

Breaking and accelerating in a game like Forza 5 is accompanied by vibrations in the triggers. This adds a new level of feedback to players. I was able to brake and accelerate more effectively by judging the intensity of the rumble.

This new feature could also be potentially useful in shooters. When a shot comes from your 2 o-clock, the motor will rumble in your RT and transfer to the right handle as you turn your character left, allowing you to zero in on where the shot came from, even if you missed the on-screen prompt.

The Xbox One box itself is not as big as pictures make it seem. The console would look great in any entertainment center, sharing spaces with other black boxy things.

Conclusion – and why you should be worried: 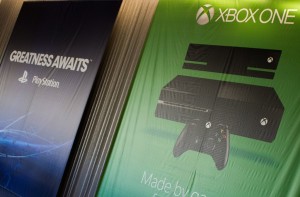 The consoles themselves are great, sleek pieces of hardware. The controllers for both consoles are perfect, with my personal taste leaning more towards the Xbox One’s.

This all sounds great, why should I be worried?

Because the only games running on actual next-gen hardware were: Forza 5, Ryse, Octodad, and DriveClub.

Octodad is a very visually simplistic game, however the resolution was definitely not 1080p and there was no anti-aliasing. It also seemed to be running at 30fps. DriveClub looked nice, but Forza 5 blew it out of the water in terms of graphical fidelity and gameplay. Ryse was the best looking game, but played like absolute clunky garbage. 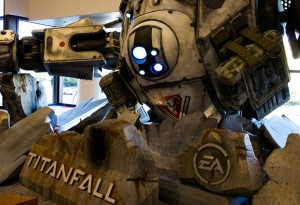 The rest of the games: Assassin’s Creed IV: Blackflag, Watch Dogs, Battlefield 4, Titanfall, and The Crew – were all running on PCs with Xbox 360 or PS4 controllers connected (this was confirmed by interviews with the marketing and PR representatives).

The games mentioned above looked amazing, absolutely gorgeous, downright amazing. But they were all on developmental PCs that “promised” the same fidelity on the soon-to-be-released next-gen hardware.

With the release of the new consoles so close, why aren’t these developers showing what the actual hardware can do?

Something is fishy here and it’s why I’ve decided to hold off pre-ordering either console.