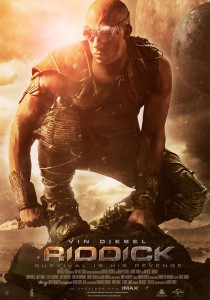 I hold a special place for Riddick (played by charismatic actor, Vin Diesel) in my sci-fi loving heart. Nothing beats the nostalgia of working at Hollywood Video in my rebellious, pimple-faced high school stage of my life and discovering a little gem called Pitch Black. The movie was well written, had well done action, and I still attest to this day that Riddick was one of the more “original” sci-fi characters to grace the screen in recent years. His rough and “hate it but love it attitude” was perfect for an anti-hero.

So you can probably guess I was pretty excited for Riddick. A direct sequel to 2004’s rocky but acceptable, The Chronicles of Riddick. There was one major thing wrong with Chronicles: it wasn’t rated R. A mistake the newest film didn’t make, but failed to take true advantage of.

WARNING: Spoilers for The Chronicles of Riddick. But seriously, come on. Do I really need a spoiler warning for a movie that’s almost a decade old? I’m pretty sure there’s a certain “statute of limitations” on things like this.

Riddick picks up right where the last film left off. Right from the get go we get caught up on what Richard B. Riddick has been up to since his “keep what you kill” battle with the Lord Marshal of the last film, which in turn left Riddick in charge of an entire race of religious, but beautiful zombies – the Necromongers. The Necromongers were an awesome addition to the lore of Riddick’s universe, and I was excited for their return in Riddick. One problem, though: They’re seriously in the movie for like 10 minutes. Don’t even get me started on Karl Urban’s screen time. Seriously, why even have him in the film? Riddick had the perfect opportunity to flesh out the Necromonger-Riddick relationship. Instead, the movie rushed over it. Almost like the creators of the franchise felt the Necromongers were a really bad idea and just had to give closure to their existence in the last film.

So back to the premise of Riddick.

Our anti-hero has been left for dead on an almost lifeless planet, by none other than a forgettable no-good Necromonger (where’s Dredd? Oh sorry, I mean Vaako). The beginning of this film is where, in my opinion, the movie truly shines. We get more of the “do anything to survive” Riddick, than the later 2/3rds of the film presents to us. Riddick does what he can to survive, no matter the cost. There’s a lot of good pacing here. There’s almost no dialogue, other than some grizzly voice over by Vin Diesel. The film has some awesome moments with Riddick and the local wildlife. The film even gives Riddick an unlikely, but totally awesome companion. However, things can’t always go perfect for Riddick; otherwise we wouldn’t have a movie, right? Riddick makes a startling and very Pitch Black-like discovery about his new home. Naturally, he wants to get the hell out of Dodge, so what better way to do that than activate the emergency beacon on an abandoned outpost; calling in mercenaries (so Riddick can hitch a ride of course, or steal one).

This is where the movie starts to fall apart. There’s some decent casting among the mercenaries (Katee Sackhoff, Dave Bautista and Jordi Mollà), but the film dances around a much deeper relationship between the mercenaries and Riddick, but ultimately falls for a more predictable revenge subplot. Also, you get a sense of a history or secret intent with Riddick and Katee Sackhoff’s character, Dhal. However, the film just dances around this and never revisits it.

For those not familiar with the character, Riddick is not a sentimental or “hero” in the true sense of the word. He does what he needs to stay alive, and his conscious is dictated by the characters he’s around. So with this said, Riddick has some really questionable dialogue and scenes that don’t fit his character from the previous films (one in particular, where there is some intense walking with some overly dramatic music, is laughably bad). It just seems the series’ creators just stopped trying. You’re given an R-rating, and instead of using that to its full potential – like Dredd did – you’re treated to some bad cuts and generic action kills. There is really only one kill that garnered a reaction from the audience. For an R-rated action movie starring a dude who kills only with knives and pointy things – seriously?

The movie has a few great moments, but ultimately falls flat in the second and third acts. With some minor tweaking of the dialogue and a revamp of the kills that populate the film, this movie could have been a good, fun and pleasing sci-fi flick.

In the end, it saddens me to say that maybe you should wait for this at a Redbox near you. The film cost only $38 million to make – an impressive feat, considering the amount of special effects used, so the studio will most likely make their money back. If you’re a huge fan of the franchise, I’d say go and see it (just prepare yourself). If you have nothing better to do, go see it. If you want to see a good sci-fi film this summer, go see Elysium instead.

Riddick gets a C-

Hopefully if the next two films come to fruition (which is likely if this film turns a profit), let’s hope Vin and the writers can come up with something far better for fans and newcomers. When it comes out on Blu-ray, I’ll give it a second go and see how I feel about it. Till then, I’m still holding out hope for you, Riddick.