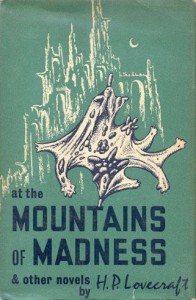 When I first read the story for this on Deadline Hollywood, I figured it would be a massive trolling effort on the part of Nikki Finke. I thought to myself, “No way is Cameron and del Toro working on a celebrate Lovecraft story, that would be a nerd’s wet dream.” Well, it turns out that del Toro’s next project will be based upon the famous Lovecraft serialized novella, Mountains of Madness.

Mountains of Madness is set in the1930s and follows geologist, William Dyer, on his expedition to the South Pole where he makes the amazing discovery of ancient ruins that are from a race that is not our own.

“What ‘Mountains of Madness’ is is a throwback to something nobody does anymore, it’s tentpole horror,” he told ComingSoon.net. “Everybody now understands horror as minimum investment, maximum return, and most of the time, they go at it, as production entities, with great cynicism, like ‘Let’s make it really gory or extreme’ and for a very low budget, and recuperate our investment, make money, all that. If you make a horror movie for half a million and it makes 4, they’re very happy. The studio sees horror movies as something they will not invest more than $30-40 million. ‘Mountains of Madness’ needs to be tentpole in the way that the tentpole movies of the past were, about $130 million.”

Many people have wondered what del Toro’s next project would be after dropping out of The Hobbit, but not many expected this since it seemed he had dropped out of this project officially earlier this summer. Was it through the encouragement of James Cameron who will be producing the film that he took the project back on? Cameron is also said to he helping del Toro produce the film in 3D.