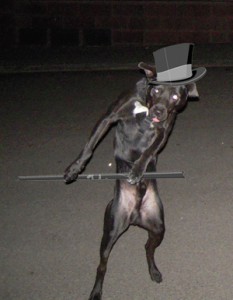 Today’s viral video is something special. The video in question that is starting to go viral across the web is of a dog apparently “dancing” to techno music.  The dogs weird spasms and jumps seem to match well with the overdubbed techno of the video.

So, what is this in reality? Turns out it is a video of someone’s dog, named Soba, who has a neurological condition called cerebellar hypoplasia, which causes the spasms we see due to her diminished fine motor skills and balance. According to the owner though, “It takes this happy little girl more effort to get where she wants to go, but get there she does!”

Good to hear. Watch both videos below, and watch as Soba grooves to the music!