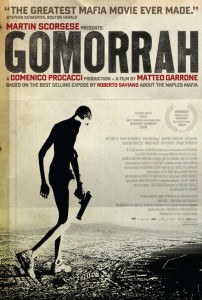 This Italian mob movie isn’t as flashy or romanticized as many American gangster pictures are, but the films gritty and real life feel give the picture an extra weight and tension that you never know what is going to happen.

Opening with a set of hits that sets off a civil war among gangs, we follow a group of individuals that fall on both sides of the battle, young up and comers, a seemingly innocent bystander in the process, and a pair of rouge crooks reeking havoc for one bosses territory.  As things progress through the film things slowly get worse and worse for those involved with the old establishment and lines are drawn with deaths tolls ratcheting up higher and higher as people grasp for power.  Some of the characters we follow are the money handler who doles out weekly payments for the old time establishment, a young man who is being pulled into the crime working for an entrepreneur who deals with disposing toxic waste in neighborhoods back yards, a excellent tailor who’s employer gets him into unforeseen trouble in the competitive fashion production industry, a mother who must deal with the heat of her son sticking with the established crime bosses, and a pair of small time crooks who think they are hot shit and live life as if they were Tony Montana.  The characters run the gauntlet of all the classes and people that are affected by crime whether directly involved or associated by proxy.  That is the films real achievement, in showing how crime can affect anyone when things get this bad and as the final facts scroll across the screen the directors have achieved their message.

Now, Matteo Garrone whom directed this film deserves heaps of praise for keeping such a large cast of characters both identifiable and interesting giving everyone a unique personality.  The film is also shot with a lot of handheld footage that throws us right into a lot of the action, but Garrone’s direction also has a number of inventive sequences and shot that really impress.  With the wealth of characters involved things do tend to get a bit confusing from time to time, but you are always able to gather your senses after a few moments, you have to ask yourself who is this again and what were they doing, but half way through the film this issue subsides for the most part. (I just want it to be known to those who have trouble following films sometime that the film is going to throw you around to a lot and to a lot of different faces, you were warned.)

The story as a whole is quite compelling with the whole turf war and looking for a better alternative to your life being the prominent themes of the picture.  Sadly, most of the characters really don’t find solace or a new way of life any better while many lose their lives and/or dreams due to crime.  The film is tragic stuff and really helps send home the message that this real life issue, as this film is far closer to non-fiction than we would like to believe, is one that desperately needs to be cleaned up over in Italy.

The cast also deserves a lot of praise for really capturing the lives of these people and giving everyone a distinct personality from one another so we aren’t left with a bunch of faceless and unidentifiable gangsters.  Marco Macor and Ciro Petrone play Marco and Ciro, respectively, and are probably the most memorable in that they are annoying, as they are supposed to be, and cocky little bastards who think they are the greatest gangsters in the world.  The two are fantastic in their parts and will have you shaking in disgust at their actions and arrogance in quite a hurry.  Carmine Paternoster gets the least amount of screen time out of the main characters but he is one of the few positive aspects in this movie as he convincingly shows his character Roberto’s hesitation towards his potential new life helping dispose of toxic materials poisoning his people.  Toni Servillo plays Roberto’s boss Franco and is one of the more memorable characters in the film as he makes a fortune at the expense of others and never gets his hands dirty while he destroys countless lives.  Salvatore Abruzzese plays our youngest focal point in Toto, a 13 year old being sucked into the game by the cash and awe of being in crime and he does a great job at conveying that need to fit in even if it is in the world of crime; because sadly that is all he knows.  This brings me to the best two actors in the film playing the most relatable characters in Don Ciro played by Gianfelice Imparato and Pasquale played by Salvatore Cantalupo.  Imparato’s Ciro is the aforementioned money handler who gets in way over his head and is caught in the middle of the war as he is responsible for what both sides need/want, money.  Imparato plays fear so beautifully that we can’t help but be scared for him even if he is a bit spineless but he, like Pasquale, is the closet thing to us the viewer and we feel his worry and fears.  Pasquale played by Cantalupo is the previously touched upon tailor and shows how innocent people are affected by crime as much as those involved.  Cantalupo captures his characters joy in his work and his final scene is one so full of pride even as his life has been completely been changed.

In the end, Gomorrah is a wonderful and honest take on the world of crime that hasn’t been seen since City of God.  While this film isn’t quite up to the caliber of that film it isn’t to far behind and is one of the better foreign films of the 09 year.  Full of interesting and compelling characters there is plenty to engage you and you can even relate to a couple of these people as well.  A tragic tale that has no one really coming out better in the end, depending on your prospective, you are transported to a world you are happy you don’t have to live in and feel bad for the people that are regulated to this life so ravaged by crime.

Gomorrah is an A-