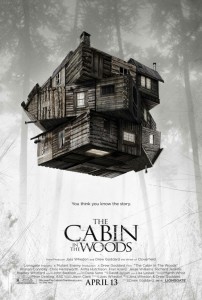 The Cabin in the Woods has been the talk of internet sites for quite some time.  It has quite a history behind it as a result.    After writing Cloverfield, which JJ Abrams helped  produce, Drew Goddard turned to another fan favorite, Joss Whedon, to co-write and produce his next film which he looked as his directorial debut.  When casting, the two looked for lesser known actors in their leads including Chris Hemsworth.  The film completed principal photography in May 2009, but sat on the back burner due to MGM’s financial woes.  Earlier this year Lionsgate picked up distribution rights, and audiences will finally get a chance to see a film they have been clamoring for.

Before the trailer hit earlier today little was known outside the outline of the story.  A group of young people are stranded in the middle of nowhere in a run down house where their cell phones probably don’t get service.  Fans expected that there had to be more though.  The trailer below tells us that there most definitely is more.  Check out the trailer below then scroll down to hear my thoughts.

I am not entirely sure what to think other than that I like it, and it continues to make me think which is exactly what a trailer needs to do.  Is it like a fun house or is it messing with kids minds?  Is this a dome like The Truman Show with a live feed?  Does an outside group video tape everything and sell the videos like in Vacancy?  How come we don’t get to see Richard Jenkins (a phenomenal actor)?  Is he the mastermind behind it all?

I also want to point out the poster at the top of this article.  I absolutely love it.  If this was the only poster they released for the film I think it would be brilliant.  It’s weird.  It makes you want to look at it more.  It has a great WTF quality to it.  The world needs more great posters like this.

This film has a lot going for it outside of the movie itself.  Chris Hemsworth is now Thor.  He is much more recognizable to a mass audience and the studio can sell that name and face to get more exposure.  Also, for those who have not heard of Joss Whedon before, his name is going to be popping up a lot leading up to the release of this film primarily because he is directing The Avengers that hits in May.

What did you think of the trailer?  Any theories on what exactly is going on?  Let us know in the comments below.