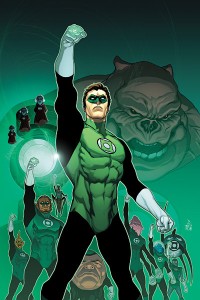 Just last week Geoff Johns was named Chief Creative Officer of DC Entertainment, this week he is already down at the DC Entertainment Production, Green Lantern.  Which is great, because there are probably not many people that know Green Lantern better than Johns, who is currently in charge of the fourth volume of the Green Lantern comic.

Here are his Green Lantern tweets:

Kilowog, the Guardians, Oa…all breathtaking. The age of Green Lantern is upon us!!

Back from an amazing trip to Green Lantern town a.k.a. New Orleans!! Ryan IS Hal. And Mark Strong is going to be a brilliant Sinestro.

I know it is his job to be excited for stuff like this, but I can’t help but be excited that someone like him is giving a thumbs up to the project. I can only hope that they will involve him with the Flash film if they continue down that road. I’m still looking forward to how they plan to sell this film to mass audiences. This is unlike any other superhero film that has been seen before.