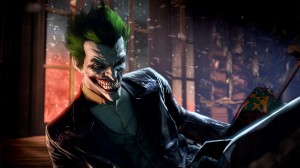 WB Games has one kickass marketing department. This game went from “meh” to “OMG I can’t wait” in a matter of months.

The newest trailer from developer WB Games Montreal shows the Caped Crusader’s cave and newest villains, along with a sample of the game’s great voice acting. For those wondering, Troy Baker is voicing the Joker. That’s the same actor who voiced Booker DeWitt from Bioshock Infinite and Joel from The Last of Us.

Batman: Arkham Origins will be available on October 25th for PC, PS3, WiiU, and Xbox 360.

Gamescom is currently underway in Germany, often described as the “E3 of Europe.”