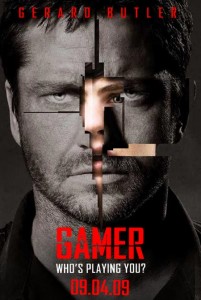 We have all seen movies made about video games. This movie is abstract in the sense that this type of video game does not yet exist. In this game, the characters in the game are not so much characters as they are real human beings. These real people are actually convicted death row inmates who are given the chance to fight through 30 battles, with the prize being their freedom if they can survive.

The movie starts in the midst of one of these battles with Gerard Butler’s character “Kable”, fighting through his 27th battle. No convict has gotten farther than he has to that point. The convicts simply have to make it to a save point in order to pass on to the next battle. In order to make it to that save point however; they have to rely on their human players. As any gamer will tell you, there are gamers, and then there are GAMERS. Luckily for Kable, he is being played by the latter, a 17 yr old named Simon (Logan Lerman) who seems unable to lose. In order for Simon to control Kable, there are nanocells implanted into Kable brain which make him follow every motion that Simon directs. This is called the Nanex. Unfortunately for Kable, if he dies in the game, he dies in real life as well. As good as Simon is, he doesn’t take the life and death setup nearly as serious as Kable does.

The game was created, and is controlled by the Villian, Ken Castle (Michael C. Hall). He is a super genius that apparently really enjoys the pain and suffering of others, especially if it makes him rich – which he definitely is. Towards the end of the movie, Kastle is able to breach the security set forth in the “game” and break out into the real world for a showdown with Castle.

Who’s the movie for? Action buffs and absolutely gamers. Anyone who is a gamer will understand the verbage of the movie, and action buffs will simply enjoy the action, and there is lots of it. This movie is not really a good idea for anyone else, as they won’t get it at all. This movie is the BEST video game movie I have seen to date, and somehow keeps at bay the cheese factor of movies like 2005’s DOOM.

I give it a solid C all around, but for gamers I would give it a B.