G.I. Joe coming to DVD and Blu-Ray on November 3rd

I know a lot of people are waiting to see this on DVD, because they didn’t want to pay the price for admission. Now you can finally watch the summer blockbuster G.I. Joe from the comfort of your own couch. I personally look forward to rewinding all the silly parts, but I’m not sure I have enough time in my day. Well here is the press release for you: 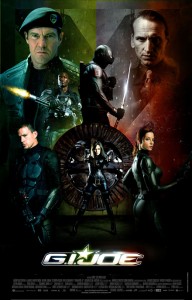 The G.I. JOE team travels the world from the Egyptian desert to the polar ice caps and the streets of Paris in a high stakes pursuit of COBRA, an evil international organization threatening to use a technology that could bring the world to its knees. Armed with the coolest hi-tech gadgets and weapons, including jaw-dropping accelerator and camouflage suits, G.I. JOE is the last line of defense against those intent on world domination.

The G.I. JOE: The Rise of Cobra two-disc Blu-ray and DVD include a digital copy of the film, commentary by director Stephen Sommers and producer Bob Ducsay, “The Big Bang Theory: The Making of G.I. JOE”, which takes viewers behind-the-scenes for a look at how the filmmakers turned the perennially popular action figures into a summer blockbuster and “Next-Gen Action: The Amazing Visual FX and Design of G.I. JOE”, which showcases the incredible work that went into creating over 1,650 visual effect shots and the challenges the filmmakers faced in bringing the world of G.I. JOE and COBRA to life. The film also will be available on a single disc DVD, which includes the commentary.

The two-disc DVD and Blu-ray packages will also feature augmented reality technology that will allow owners to participate in an exclusive 3D holographic G.I. JOE combat experience, utilizing their webcams and a special website. Fans will be able to choose between SNAKE EYES and STORM SHADOW, two of the most popular G.I. JOE and COBRA characters, and battle against their enemies one-on-one in an immersive 3D video game.

Disc 2:
• Digital Copy
• The Big Bang Theory: The Making of G.I. JOE— Join the G.I. JOE team as they set out to “Sommer-size” the summer action epic and bring G.I. JOE to the big screen.
• Next-Gen Action: The Amazing Visual FX and Design of G.I. JOE— With over 1,650 visual effect shots, G.I. JOE was a truly massive endeavor. Showcasing the hard work and creativity of the film’s effects and design team, this piece looks at the unique challenges of bringing the world of G.I. JOE and COBRA to life, while immersing viewers in the incredible thrills and various FX challenges of the film’s major action sequences.

About Hasbro
Hasbro, Inc. (NYSE:HAS) is a worldwide leader in children’s and family leisure time products and services with a rich portfolio of brands and entertainment properties that provides some of the highest quality and most recognizable play and recreational experiences in the world. As a brand-driven, consumer-focused global company, Hasbro brings to market a range of toys, games and licensed products, from traditional to high-tech and digital, under such powerful brand names as TRANSFORMERS, PLAYSKOOL, TONKA, MILTON BRADLEY, PARKER BROTHERS, CRANIUM and WIZARDS OF THE COAST. Come see how we inspire play through our brands at