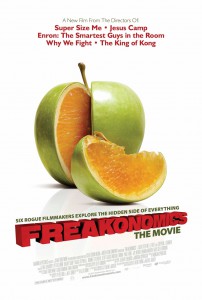 So often when I tell friends about an interesting non-fiction book, they scoff at me, and tell me to stop being so pretentious. Unfortunately, a similar reaction is garnered when I talk about an awesome documentary. (I still can’t get friends to watch Hoop Dreams.) However, when it comes to Freakonomics, just about anyone can pick it up and find plenty to interest them.  Which is why I was so excited to see it made into a documentary, one if done right could be shared with friends as easily as the book.

For those not in the know, Freakonomics is the brainchild of University of Chicago economist Steven Levitt, and journalist Stephen J. Dubner. In the book they use Levitt’s unusual view of data sets to mine conclusions not normally taken from the sets.  They ask questions like, “What do school teachers and sumo wrestlers have in common?” (Answer: they both cheat.) “Where have all the criminals gone?” (The answer to this may surprise you, and the issue has stayed controversial since publication.) The beauty of the book was how Levitt found answers in non-traditional data, and through his understanding of incentives came up with some very bold conclusions.

So, does the film contain the same entertainment value for geeks that the books do?

Nope, not really. Throughout the book you are treated to how Levitt and Dubner reached their conclusions, and it was never very dull. However, in the film, we are only given the broad outcome with little on how they come to their conclusion. I wholly expected another film, especially with the caliber of the documentary film makers who worked on it. Morgan Spurlock who achieved fame for his highly entertaining film Super Size Me, falls flat with his portion of the film. Too much charm, not enough answers to make sense.

Freakonomics highlights much of what is wrong with many documentaries in the past ten years. The medium is becoming overrun with films that focus so hard on their bold conclusions, that they forget to tell us why these conclusions are important.  Sure, you have a message to sell, but I’m not getting a reason on why you want to sell the message. The ideas are never fully articulated, and leave the audience wondering why we should care.

As much as I’d like to recommend Freakonomics to you, I can’t. You’d be better off reading the book. If you have read the book, and would like to see some of the stories presented in a visual form, it might entertain you a bit, but you’ll be wondering where the meat of the film has gone.