From the moment I heard about it, I was intrigued.

KFC, the master of coronary delights, apparently decided deep fried food was way too healthy and thought, “How can we make our food kill people even more quickly?”

Presenting, the Double Down.

What is it, exactly?

Imagine a sandwich with no bun. What’s this, you ask? How is that possible?

Well, my friend, the bun is meat. That’s right, two pieces of grilled or original recipe chicken. In between, cheese, bacon, and sauce. This pretty much ensures the sandwich is only for the manliest of men. Or masochists. So, I figured what the hey and popped the $5 for it. I opened the box, and this awaited. 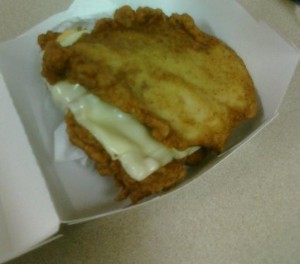 The ads don't mention it comes with a complimentary defibrillator.

The bacon isn’t even visible.

Summoning the little courage I had left from years of rejection by women, I took the first bite.

I tell you what, the sandwich might sound gross, but it works. Be warned, though, there is a RIDICULOUS amount of sodium in it (1,380 mg, to be exact, in the Original Recipe version. Incredulously, the grilled version has 1,430!). But the chicken is just two breast pieces, the bacon was crispy, and the cheese and sauce add more salty goodness.

I finally managed to down the entire thing with a feeling of triumph mixed with sadness knowing my arteries have given up and walked off the job. The sandwich itself was good, but I honestly don’t know if I could ever eat another one, as I’m pretty sure I cut my life expectancy by 1/3.

I get the feeling this might just be a promotional thing that won’t stay on the menu for long. For the sake of our country’s health, I hope so. But, if you’re intrigued, don’t like life, or just plain feel like your blood’s been racing through your system too quickly, give it a shot.