First Five Minutes of Disney’s ‘The Princess and the Frog’ 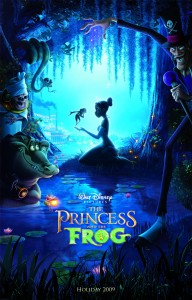 Well here you go folks, the first five minutes of the return to traditional animation by Disney. There is some unfinished animation, but this clip has really piqued my interest in the project. As much as I love the detail, and substantial look of CG animation, it has become wholly overused. I still remember being a kid and loving those Disney animated movies. Now hopefully another generation will experience that.

After being summoned back to the Mouse House by Pixar founder John Lasseter in 2006, Alladin and Treasure Planet directors Ron Clements and John Musker join forces once again for this traditionally animated 2-D fantasy for the entire family, set in New Orleans. Former Dreamgirl Anika Noni Rose will voice the lead character Tiana, Disney’s first African-American heroine in their long heritage of fairy tale animated features. Also in the voice cast is Keith David, lending his baritone chords to the film’s villain, Dr. Facilier. ~ Jason Buchanan, All Movie Guide