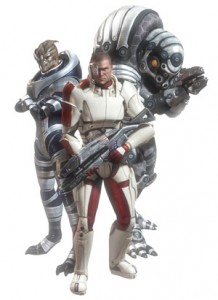 The first Mass Effect game is probably one of my favorite games on the XBox360. Bioware was very famous for their Star Wars: Knights of the Old Republic RPG they did a while back, and I was afraid Mass Effect would be a Star Wars without the name. However, they created a space epic of their own, and pushed a few people’s buttons.

Which brings me to another point. Mass Effect caught some slack for having a love story, which culminated in a sex scene. If you watch the video, it isn’t anything worse that what is shown on a lot of primetime TV shows. People were up in arms that this was in a video game, even though this game was rated Mature. We allow nudity in R-Rated films, an MA game is along those same lines. What is the difference? What got people so up in arms over something so little? Is it because the majority of the nation still believes video games to be something only for children? Well, if they were upset about last game, it looks like there might be more of the same. BioWare should be applauded for taking a risk, and moving games forward. An engaging story is great, and what they did is no different than many films, books and tv shows.

So, enough of that. Here is the trailer, and another video showing “Suspect Zero”.