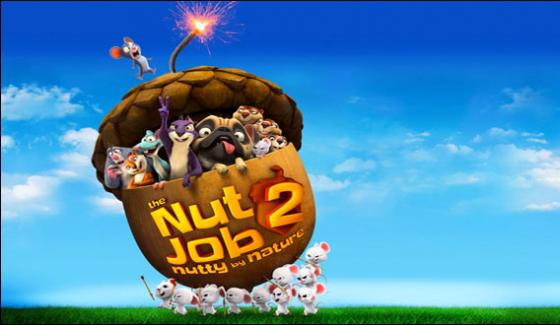 The Nut Job 2: Nutty by Nature is the sequel that nobody asked for, and is the follow-up to its 2013 predecessor (you guessed it!), The Nut Job. Did you know it even existed? I didn’t.

In this film, we follow Surly Squirrel: an egotistical purple squirrel voiced by Will Arnett (whom I found to be quite a bit unlikeable throughout the majority of the ninety minute run-time). The story begins with a party in a conveniently abandoned nut factory to which Surly and his rodent pals enjoy a sweet lifestyle of overindulging and partying every single night. If one cared enough, he or she would wonder how this abandoned factory seemed to have an endless supply of nuts with the amount of debauchery that these critters engage in, but I digress. His counterpart and voice of reason is a red squirrel named Andie (Katherine Heigl), who is introduced by trying to teach a trio of young squirrels how to gather. She believes that everyone has lost their instinctual ability to provide for themselves, with the nut factory being their home.

Now, Surly and crew are left to find a new source of food. Ignoring Andie’s pleas to work together and gather food, Surly convinces the crew he and his silent pal, Buddy, will prevail in finding a new source of food that doesn’t require working for it. A montage follows of their failed endeavors, filled with a bunch of slapstick humor and tired stereotypes (cops sure love donuts). The kids will likely find it entertaining, but I found it less than inspiring.

The central conflict of the film revolves around a totally corrupt Oakton city mayor (and they really hammer in the clichéd role every chance they get) wanting to tear down Liberty Park to build an amusement park for (again, you guessed it!) more money. However, Liberty Park is where the animals live and together, they must overcome all odds to stop this from happening! This involves rodents commandeering bulldozers, dozens of mice teaming up to appear as a human being in an animal control suit, a squirrel vs man battle on the top of a hot air balloon and at least one salty viewer waiting for it to just be over.

Performance wise, you get what you expect from most of the cast – nothing remarkable. There are a few chuckles here and there, but even while writing this review I can’t remember what they were. It’s colorful and will most likely keep a child’s attention through its entirety. And while the overall theme of togetherness and park conservation is commendable, the film itself is just… entirely forgettable.

On the bright side, at least you can tell yourself, “thankfully it wasn’t about emojis.”

The Nut Job 2: Nutty by Nature gets a D+