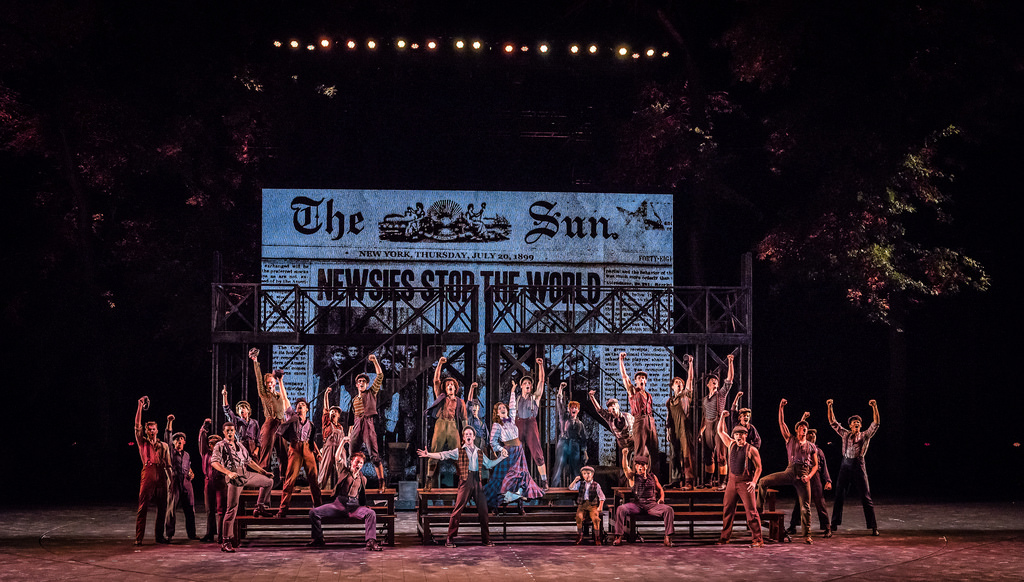 I grew up watching Disney’s 1992 film, Newsies, starring a young Christian Bale. The movie was entertaining, but nothing revolutionary from a filmmaking perspective. It grossed just under $3 million dollars on a $15 million dollar budget. Yet, I always found the story, and particularly the songs, quite intriguing. And that came as no surprise, having been composed by legend Alan Menken (Beauty and the Beast, The Little Mermaid). While the film was met by some harsh criticism and low returns, it was turned into a Broadway musical in 2012 that was nominated for eight Tony Awards – winning two for Best Choreography (Christopher Gattelli) and Best Original Score (Alan Menken and Jack Feldman).

Now the musical, which ran from 2012 to 2014 on Broadway, is closing out the 99th season of The Muny in St. Louis. And thank goodness the powers that be had the good sense to turn the film into a musical, because it is now one of my personal favorites of all time. And audiences and critics can agree, the show is very good. 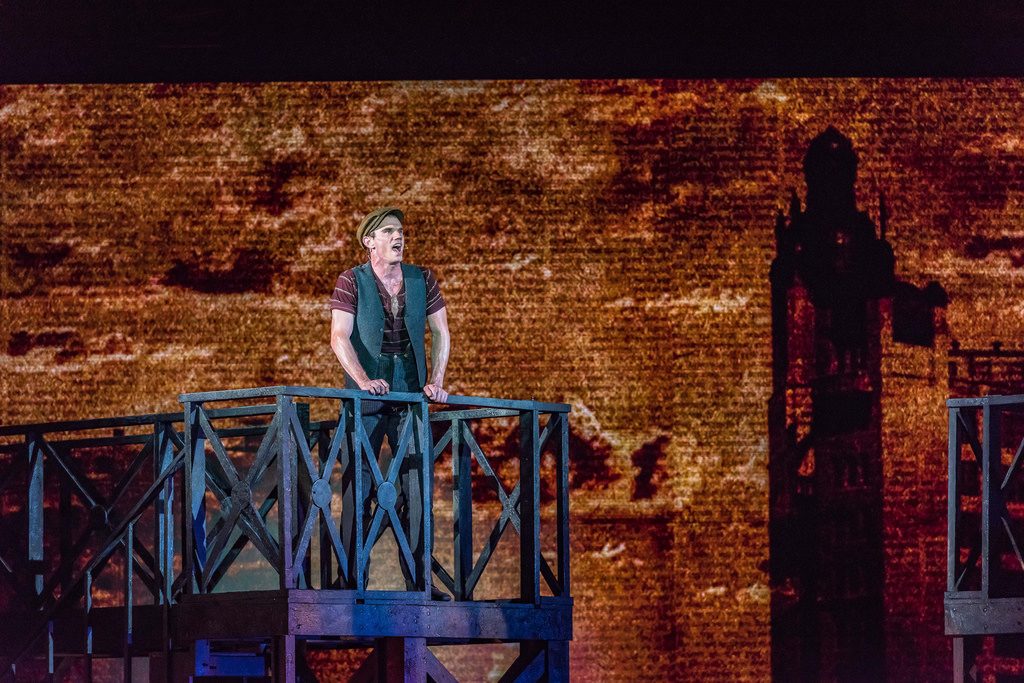 The story centers around the historical Newsboys Strike of 1899. Jack Kelly (JAY ARMSTRONG JOHNSON) plays the leader of the newsies – a group of homeless orphans who deliver papers to survive on the streets of New York. The show opens as Jack tells his friend Crutchie (DANIEL QUADRINO) that he dreams of leaving his current life behind, and moving to “Santa Fe.” As the day begins, we get a terrific number from the cast of newsies (“Carrying the Banner”) who scale the buildings of the city as they prepare for work. As they line up to buy their papers for the day, Jack is introduced to Davey (SPENCER DAVIS MILFORD) and his little brother Les (GABRIEL CYTRON), who he decides to take under his wing. Meanwhile, newspaper magnate Joseph Pulitzer (DAVIS GAINES) has decided to raise “The Bottom Line” by increasing the cost of papers for the newsies. This is the catalyst for the strike and impromptu union Jack forms, which is covered by up-and-coming reporter Katherine Plumber (TESSA GRADY).

Newsies is packed full of memorable songs, which will stay with you long after you leave the theatre. I know the first time I saw “The World Will Know” performed live, I couldn’t get it out of my head. And this performance in particular had the hairs on my arms standing on end. It is a powerful number, which the entire cast takes and turns into their own. Matched with the brilliant choreography and direction of Chris Bailey, this production is a breathtaking spectacle which is sure to entertain from beginning to end.

Jay Armstrong Johnson is fantastic as Jack, the charismatic leader of the newsies. The actor has the perfect amount of charm and talent to steal the show for many of his scenes. Johnson has a number of Broadway credits (including one of my favorites, Hands on a Hardbody) as well as prior roles at The Muny (Hello, Dolly!, 42nd Street). His chemistry with Tessa Grady, making her Muny debut with the show, is a wonderful sight to behold. The actor received a thunderous standing ovation at the end of the performance, which was much deserved. 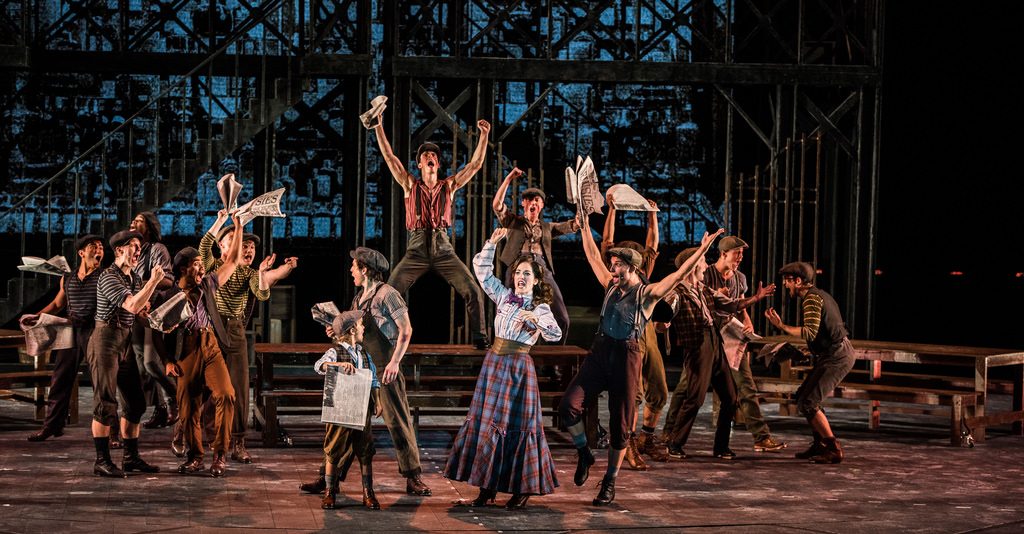 Grady is a talent in her own right, with a beautiful singing voice and perfect annunciation for each line. She nailed the role of Katherine, and was a delight to watch perform every time she took to the stage. Her character is tasked with infiltrating somewhat of a boys club as she reports on the newsies, and the interactions are always fun to watch as she never ceases to holds her own. I absolutely loved her rendition of “Watch What Happens.”

The show is full of fantastic dance numbers, which take to the glorious stage of the Muny like they were meant for one another. The entire cast and ensemble are masterful as they execute the complex choreography throughout the evening. Once again, “The World Will Know” is quite impressive as the newsies dance and march around the sometimes rotating stage. It is quickly apparent that the cast is full of talented dancers, who are memorizing as they jump and twirl around during many of the songs.

With a great story, terrific music and outstanding choreography, Newsies is a must-see show that makes the perfect way to cap off the summer. Do yourself a favor and enjoy the beautiful August weather as you and your fellow patrons fill the Muny for one of the most fun shows of the year. 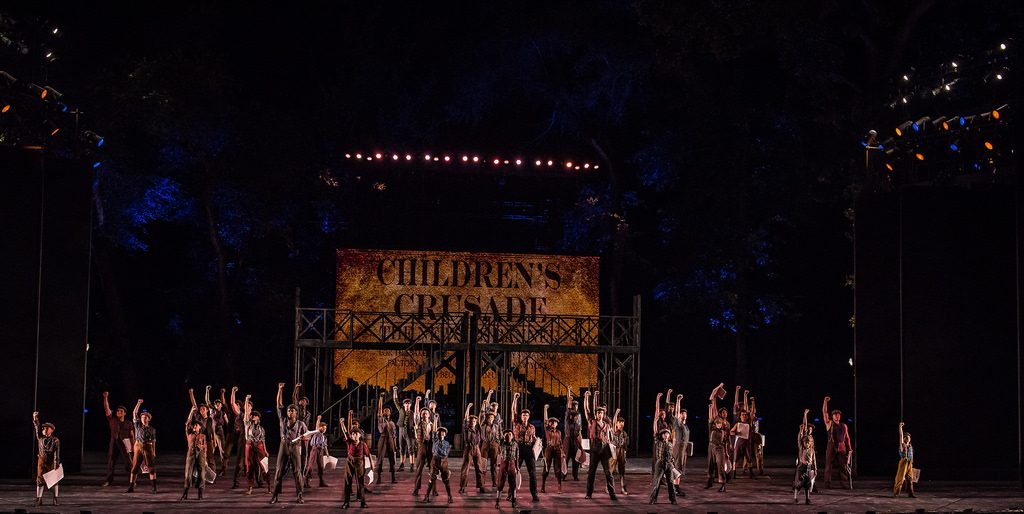