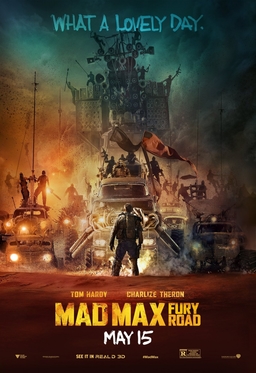 Even if you haven’t seen any of the Mad Max films, there’s still a good chance you’ve watched or heard something that the series had a direct effect on. Filmmakers like James Cameron, Guillermo del Toro, and David Fincher cite the series’ impact on their works. Rap artists such as Tupac and Snoop Dogg referenced the films either in their music videos or lyrics. Computer gamers would be hard-pressed not to recognize the impact on the Fallout universe.

Now, 30 years after the last film in the franchise was released, Max Rockatansky is ready to make his return, albeit this time in the shape of Tom Hardy. Mad Max: Fury Road may not tell much of a story at all, but I don’t think the intended audience cares so much about tiny things like plot and character development. The Mad Max world is brutal, truculent, and fueled by adrenaline. And it’s this formula that’s not only going to appeal to the original audience, but bring a whole new fanbase into the universe.

Set decades in the future, a global energy crisis has devolved the world into an environment of chaos. Power has been relegated to localized leaders, and in one particular area of Australia, King Immortan Joe (Hugh Keays-Byrne) has taken over as a tyrannical warlord. He reigns over The Citadel, an enclave in the desert that has a supply of water over which Joe has absolute control. When his loyal soldiers, the War Boys, capture a rogue loner named Max (Tom Hardy), he is put to use as a blood donor for one of the weakened War Boys, Nux (Nicholas Hoult).

Needing supplies, Joe dispatches a heavily armored war rig driven by Imperator Furiosa (Charlize Theron) to get fuel from Gas Town, a neighboring enclave. Little does he know Theron is plotting to rescue Joe’s five wives, referred to as breeders, by smuggling them in the undercarriage of the truck to the Green Place, where she was born. Furious, Joe dispatches his entire army in pursuit and leads them himself to retrieve his wives. Max, still attached to Nux, is chained to the front of a vehicle as they pursue, but he manages to escape after a brutal (and visually stunning) sandstorm. Removing his chains, he forms an uneasy alliance with Furiosa as they flee from the War Boys and Joe.