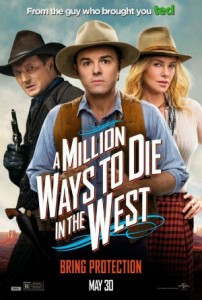 It wasn’t until I was a freshman at Truman State back in fall of 2002 (holy crap, it’s been a while) that my buddy Aric introduced me to one of his favorite shows called “Family Guy.” I’d never seen it before, but after watching my first episode (“Wasted Talent”), I was hooked. The brainchild of writer/star Seth McFarlane, it was raunchy, completely irreverent, and absolutely hilarious. I tore through the three seasons that’d been produced at that point. It would be nearly three more years before I could finally get more. I slowly lost interest as the series progressed, but I can still remember most of the first three seasons by heart.

Fast forward twelve years and Seth’s set to release his second film, A Million Ways to Die in the West. “Family Guy’s” success may have waned in recent years, but it still has an incredibly strong following, and his first film, Ted, was a resounding theatrical success, earning nearly $550 million on a $50 million budget. Taking the directorial helm again for West, McFarlane also steps in front of the camera this time, bringing the same humor and visual gags fans of “Family Guy” and “American Dad” have come to expect. The result is an entertaining romp through the old west, and one of the funniest film I’ve seen in years.

Albert Stark (McFarlane) is a simple man. He’s a sheep farmer who enjoys his simple life and avoids confrontation when possible. When his hesitance to resort to violence costs him his relationship with his girlfriend (Amanda Seyfreid), he gathers the pieces of his life and tries to move on. He quickly becomes enamored with Anna (Charlize Theron), who moves into town with her brother. The two quickly bond and develop an attraction to each other, which is great for Albert’s confidence.