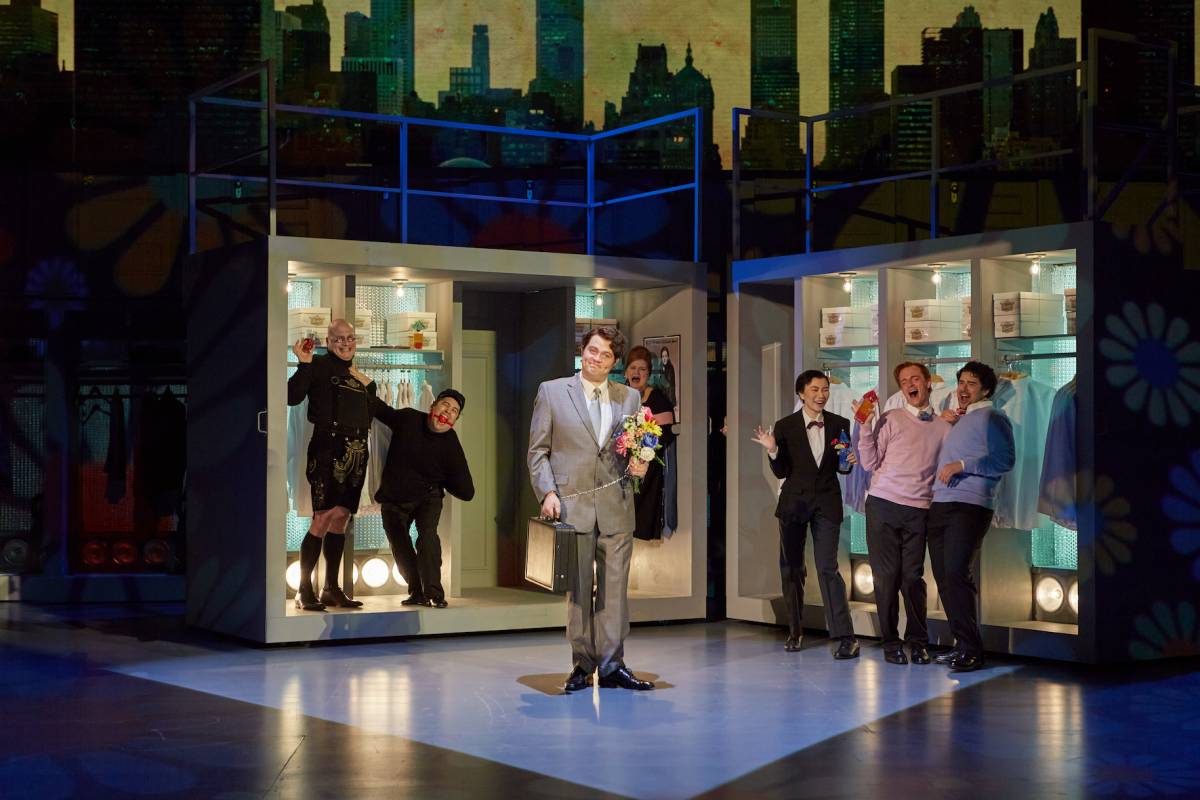 It is only fitting that Opera Theatre St. Louis closes out its 48th season with an opera about overcoming adversity. Back on its home stage in front of an audience for the first time since 2019, the company has faced several challenges, including postponing two world premiere presentations.

But, in the case of Harvey Milk, the season’s closing show, good things are worth the wait. Co-directed by James Robinson and Seán Curran, the world premiere of Harvey Milk is a masterclass on the power of opera to affect and entertain.

A shortened and revamped version of the original 1995 production, Harvey Milk is a tense drama, filled with epic tragedy. Using projections, mobile, boxed sets, and lots of activism, the opera opens in the grimy underbelly of 1970s New York.  Here, a young Harvey Milk’s passion for opera leads him down a path of self-identity. From innocent nights at the opera to the horrors of Stonewall, Harvey’s life becomes transformed.

Since coming out, Milk is more focused on creating positive change and fighting for civil rights.

Eventually settling in the Castro In San Francisco, Harvey begins to feel like he is a part of something larger, a diverse community that is striving for social change.

Using his power to schmooze, Milk entrenches himself in his surroundings, becoming the “Mayor of Castro Street.” Led by his passion for change and a desire to help his neighbors he helps transform the city he loves. He helps the Teamsters fight Coors Beer, he works for the rights of immigrants, and most importantly, he becomes a prominent figure in the Gay Rights movement.

But serving the disenfranchised comes with a cost. In addition to navigating the turbulent cultural landscape of the time, he throws his hat in the ring and becomes an elected representative of his neighborhood. Once in office he quickly learns the gamesmanship of politics. Especially when he comes to blows with another supervisor, a bigoted former cop named Dan White. Although their constant clashes escalate over time, no one in the municipal government is fully aware of how unhinged White is. Until it is too late.

More than an exploration of Harvey Milk’s legacy, librettist Michael Korie uses him as a symbol of change whose legacy of equality and social progression stands tall at a time when our citizens are more divided. Astutely aware of the times it is being performed, Korie’s narrative is a concise examination of how Milk’s place in the history of American civil rights remains vital today.

Bringing that story to life is baritone Thomas Glass. Making a grand OTSL debut, Glass’s powerful voice, and dramatic timing stand out among one of the season’s deepest ensembles. Vulnerable, enraged, and gutsy, his Milk is a firebrand leading a charge.

While act one mostly belongs to Glass, the second act is all about Alek Shrader. As the real-life nemesis of Milk, Shrader is tasked with being narrowminded, and vulgar. Disdainful and despicable as White, Shrader makes an excellent villain. Playing a man who relishes duking it out with his colleagues, he is a searing force onstage. Watching Milk’s agenda slowly eat away at White, Shrader simmers until he explodes into an eruption of emotional intensity.

As Shrader’s scenes with Glass unfold, this commanding pairing transforms a distressing work into a powerful production. Gripping and violent in their physical and emotional confrontations, the tandem fills the drama with heavy portions of interpersonal conflict. Feeding off of each other’s magnetic performances, they are simply unstoppable.

Joining the duo are Raquel Gonzalez and Nathan Stark, who are each exemplary in multiple roles. Another stunning performer is debuting mezzo-soprano, Xiao Xiao, as Henrietta Wong.

Also terrific is Mishael Eusebio, a young tenor who raises eyebrows as a young Harvey.

Clocking in as the shortest opera of the season, Harvey Milk packs a wallop of emotion and cultural history. Filled with tragedy, flawed characters, and a steely determination for justice that matches the opera’s namesake, OTSL’s newest presentation is a spectacular example of how art can serve as a form of resistance and inspiration.

OTSL’s finale is also a reminder that the history of social justice is filled with dynamic characters whose stories must be told. In this renovated form, the company’s production of Harvey Milk is passionate storytelling at its finest.

Harvey Milk runs through June 25th at the Loretto-Hilton Center on the campus of Webster University. Productions at Opera Theatre St. Louis are in English with musical accompaniment from The St. Louis Symphony Orchestra. For more information on programming or the 2020 season, visit opera-stl.org.