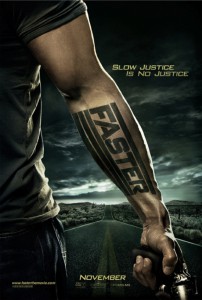 I mentioned in my review for The Tooth Fairy last year that Dwayne “The Rock” Johnson has great charisma, and has the potential to be a top tier action star, but his choices are currently hindering him. All evidence points to the fact that someone, either him or his team, have noticed his progression away from gritty action roles, and he is now starring in Faster. Judging from the trailer this looks like an over the top action romp, with a mysterious leading character, and a entertaining revenge plot.  This is exactly the type of role I had envisioned Johnson stepping into. Let’s hope the film is as entertaining as the trailer.

After 10 years in prison, Driver has a singular focus – to avenge the murder of his brother during the botched bank robbery that led to his imprisonment. Now a free man with a deadly to-do list in hand, he’s finally on his mission… but with two men on his trail – a veteran cop just days from retirement, and a young egocentric hitman with a flair for the art of killing and a newfound worthy opponent. The hunter is also the hunted. It’s a do or die race to the list’s finish as they myster surrounding his brother’s murder deepens, and new details emerge along the way hinting that Driver’s list may be incomplete.