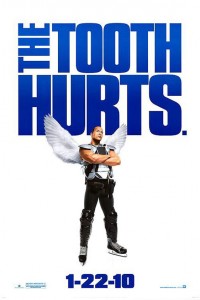 Sometimes when you see the first trailer for a film, you think “That can’t be good.” Such was the case with The Tooth Fairy. The trailer for the film was so bad that I thought it was a satirical piece done by a site like FunnyorDie. Luckily, the film wasn’t as bad as the trailer, it wasn’t much better, but it definitely was not worse.

Derek Thompson (Dwayne “The Rock” Thompson) is a hard hitting enforcer for a minor league hockey team, who has earned the nickname “The Tooth Fairy” for his devastating hits that leaves his prey with less need of dental insurance.  On ice he is as brutal as the come, off ice he is struggling to be a good boyfriend, and a father figure to his girlfriend’s two kids. Her oldest shuns him as another one in the line of boyfriends presented to the family by his mother. Her daughter loves Derek, but when Derek’s hard hitting realism manifests itself as a denial of the tooth fairy he puts himself into a world of trouble with his girlfriend, and apparently real tooth faeries. His sentence for disbelieving? He must serve two hard weeks of public service as a real tooth fairy, tutu, wings, and fairy dust and all. Can an eternal pessimist change his stripes and become what everyone around him needs him to be?

In its simplest form The Tooth Fairy is just a rehash of popular children’s films of late, such as the popular Santa Clause films featuring Tim Allen. Unfortunately, The Tooth Fairy doesn’t carry the same type of kid’s film quality that The Santa Clause does.(It should be noted that The Tooth Fairy was directed by Michael Lembeck who directed the last two Santa Clause films.) Let’s face it The Rock is no Tim Allen (although to be perfectly honest, Tim Allen doesn’t seem like Tim Allen these days). It isn’t that you don’t like The Rock, but he never seems menacing like his character should be on the ice, and he overplays the big teddy bear persona when off of it. The Rock has the potential to become a major star because of his natural charisma, but so far he is not doing himself any favors by current choice of roles.

The supporting cast saves it somewhat. Stephan Merchant may not be well known to American audiences yet, but he produces some of the best laughs in the film. Like partner Ricky Gervais, Merchant is a natural comedic talent who can turn any scene to his advantage. It is a shame that his first major film role in America has to one associated with such a paint by the numbers family comedy. Luckily, he isn’t the only comedy here. Billy Crystal pops up for a couple of scenes long enough to make you wonder what happened to the affable goofball who was so loved in the 80s and 90s. Crystal’s character is much like Bond’s Q for the Tooth Fairy set, and he has enough verbal and physical humor to make his main scene one of the more memorable.

The biggest flaw here is a script that obviously had been passed around the writer’s room, and tested one too many times. For every joke that hits, there are about five more that don’t. The writing is lazy, and relies on old and tired plot devices to move along the action. Everything about the film seems much like a rehash. There were a few scenes in the film which made seethe when they ran too long (wait for the over long “game changing” moment of the film). The laziness of the directing and editing shines through in the final project, and is hard to forgive.

There is one bright side to this film that I can’t give it the worst score. Many young children will enjoy the film, the absurdity of it all won’t hit them until they watch it much later in their lives.  Many people might say to me that I should judge this only on the merit of its intended audience, but I disagree. It has been proven many times over that you can make a great children’s film without alienating the adults who take them (Examples: The Princess Bride, Up, Toy Story, Babe, etc.). The price of admission might be worth it for some families, but may not connect with all audiences.