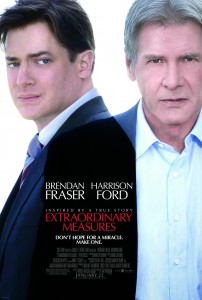 This movie is based on a true story. The story is heartwarming and interesting, but it feels a lot like a movie you would see on network TV on a Thursday night. Don’t get me wrong, the acting was good (not great) – but I felt like the movie was too drawn out and somewhat disjointed.

The movie is about the true story of funding the cure for Pompey disease. This disease causes sugars to build up in muscles and vital organs, which causes them to enlarge and eventually shut down. It also causes deterioration in motor function and children who are born with it usually don’t live past their ninth Birthday. Brendan Fraser plays a Father of two children with Pompey, and the movie follows his fight to fight for a cure. He is scared to lose his children, as the hospital stays are happening more frequently, and at the beginning of the film he and his wife almost lose their Daughter.

Harrison Ford does a good job of conveying a head-in-the-clouds scientist who makes the transition from theorist to actual clinical work. I thought his acting was the best in the film, but that wasn’t a feat that I wouldn’t have guessed prior to the film. Brendan Fraser, who in my opinion usually kills every movie he’s in actually fits in this role. He plays a scared Father who fumbles his way through everything, while clashing fiercely with almost every other character in the film. For me, he does inept well and it’s a good part for him. To be honest though, I doubt many men would be capable or competent at helping create a cure for a terminal disease – so I don’t use inept disparagingly.

After that horrible scare, and yet another Doctor telling him that he should prepare for see a quick death as a possible blessing, he pursues a Scientist ( Harrison Ford) who has revolutionary theories on how to attack the disease and bring about a cure. Together, the two work to build the cashflow and resources to created the medicine required to fight Pompey, while also fighting red tape and businessmen who’s only concern is the bottom-line.

Towards the end of the film it seems as though Frasers Character might lose his children to the disease, but a last minute drug trial orchestrated and supported by Ford’s character pull them through. The movie ends on a predictable pleasant note where the kids live and everyone is happy.

I wasn’t aware of this particular disease going into the film. It was neat to see that science occasionally does produce a cure for something so cruel. If you are a man or woman who likes warm and fuzzy movies that tug at your heart, then this movie is for you. This is a movie destined for prime-time television. If you want a different type of movie experience, then see a different movie.

Extraordinary Measures is a C