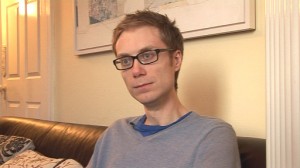 American audiences may not be too familiar with British comedian Stephen Merchant at least by name. Most Americans would know him as the hapless agent in Ricky Gervais’ HBO show Extras. However, in actuality he is the co-creator of The Office along with Ricky Gervais, and his writing partner. A very funny, if a bit odd looking, fellow. He has now joined the cast of American comedy directors The Farrelly Brothers’ new comedy Hall Pass.

Hall Pass stars Owen Wilson and Jason Sudekis as married men who think they hit the jackpot when their wives spice up their sex lives by offering free passes to have sexual encounters anywhere.  Unfortunately, this turns out to be more trouble than it is worth, especially since they aren’t the only ones getting to use them. Merchant and Curb Your Enthusiasm‘s JB Smoove will play friends of the two men. Jenna Fischer has been signed on to play one of the wives, and Amanda Bynes was signed on last week to play a girl they meet in the film.

The Farrelly Brothers have a certain brand of comedy, and you either love it or hate it, but they haven’t seen a genuine hit in a while. Will this cast finally put them back in the group of comedy all stars? Can’t be any worse than The Heartbreak Kid….