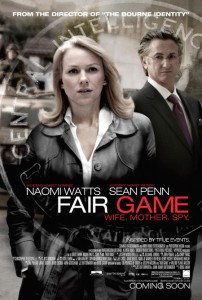 Fair Game is a film about based on the true life account of ex CIA operative Valerie Plame. She was outed as an operative by a White House advisor, supposedly because she was not giving them intelligence that fit with their weapons of mass destruction ideology that they were trying to push at the time.

Naomi Watts coldly plays the lead in this film and I was somewhat disappointed in her portrayal until about the last 15 minutes of the film. Sean Penn who plays her husband, actually does an amazing job. He is a bit over zealous, but it fits. Shot against a gray backdrop of Washington, DC, we are shown the inner workings of how the CIA gathers intelligence and tries to decide what it means. One actor was perfect when he said “you cannot put a number to information, it is not an exact science”. Director Doug Liman does a nice job transitioning the tale to the screen and I applaud the effort.

I have to say in this present day of political name calling and mudslinging, this movie fits right in. I would like we were past throwing a Presidents name around to get ratings, but it figures Sean Penn would choose this particular film to jump on his anti-Bush, anti-Republican campaign. I think they over use a lot of the old footage from the media of that time, but the film makes a great point about not believing every single thing we hear from the press or the government. Check the sources when you can. I just wish the overall feeling was more about the characters and their lives than the political feelings of that era.